Horology is the art or science of measuring time but with some of today’s marvels that infuse ingenuity and fine craftsmanship, it’s easily a mix of both. Manufacturers have made the craft of building a fine timepiece into an art form, with the outcome looking as prestigious as something that ought to be displayed and not worn.

From fashion houses like Cartier, specialists in limited editions like Devon and those that have been in the business for generations like Breguet, watch making is just as meticulous a craft as it ever was. These companies, much like any other, have a code that translates to giving the customer a sense of prestige and exclusivity while never refraining from the “awe” factor.

Since Baseworld 2015 and all the major Horological events in between we’ve compiled a list of timepieces that stand out and proclaim their right to be held in the highest regard from their peers. They embody the traditional, the future and the cultures that are both modern, and yet old-school in essence and cater to the esoteric individuals who will truly appreciate their complexities. They not only transcend the mere simplicity of telling time but with their complexities and design, make them works of art as well. Here’s our look at the 10 best watches of 2015; the ones that will make your jaws drop and have you reaching for your wallet or check book almost instantly – 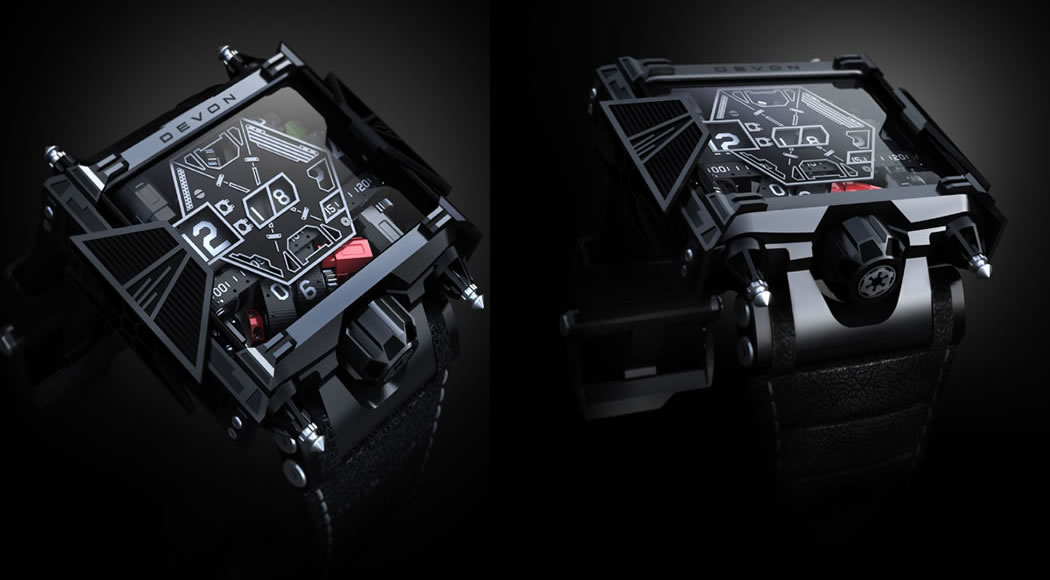 Devon Stars Wars watch
If you happen to be a Star Wars fan (and who isn’t) then the Darth Vader inspired Star Wars watch by Devon should most certainly be on your list of collectables. The limited edition timepiece (500 to be produced) encased in DLC (Diamond-Like Carbon) steel embodies all that the fans would want from a watch from the Dark Side of the Force; from modules that are intricately crafted to look like Vader’s helmet and chest-plate computer, to the Tie-Fighter styled accents on the side, the Star Wars watch by Devon is a model for all galaxies. 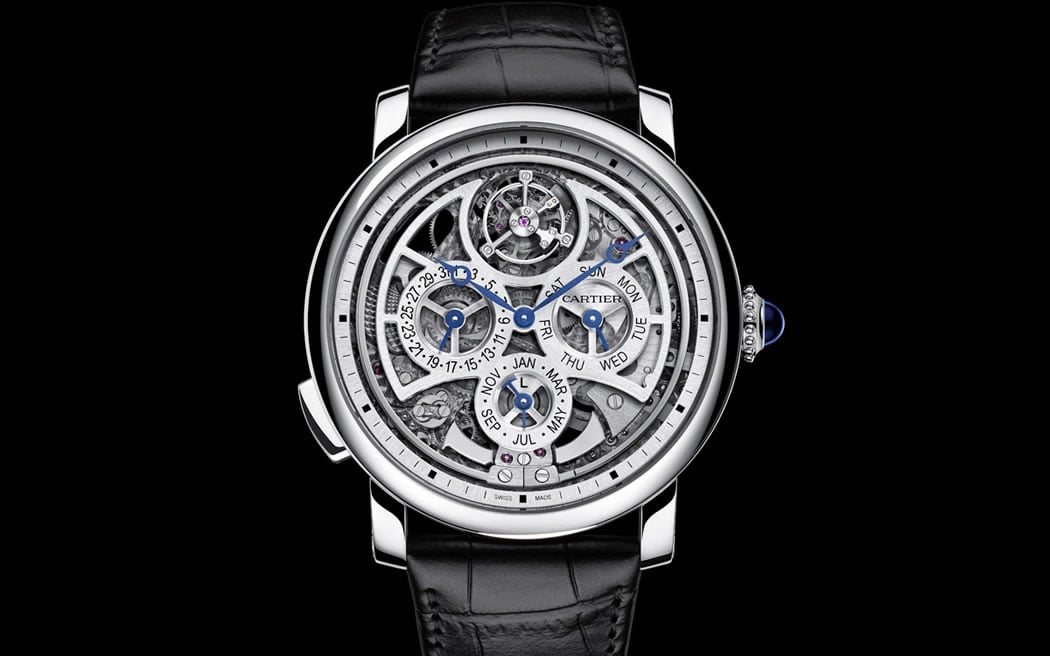 Rotonde de Cartier Skeleton
An absolute masterpiece of craftsmanship, the Flying Tourbillon styled watch from premier jeweler and now master of horology, the Rotonde de Cartier Skeleton is a sincere effort to take wrist timepieces to a new level. Its “Skeleton” design leaves it transparent through and through and is coupled with cool blue steel hands that run over the 18k white gold dial that’s been crafted using a stencil of Roman numerals. A brilliant Sapphire crystal cabochon makes up the crown and a white gold buckle culminates at the end of the black alligator strap of the limited edition (100 pieces) masterpiece of machinery. 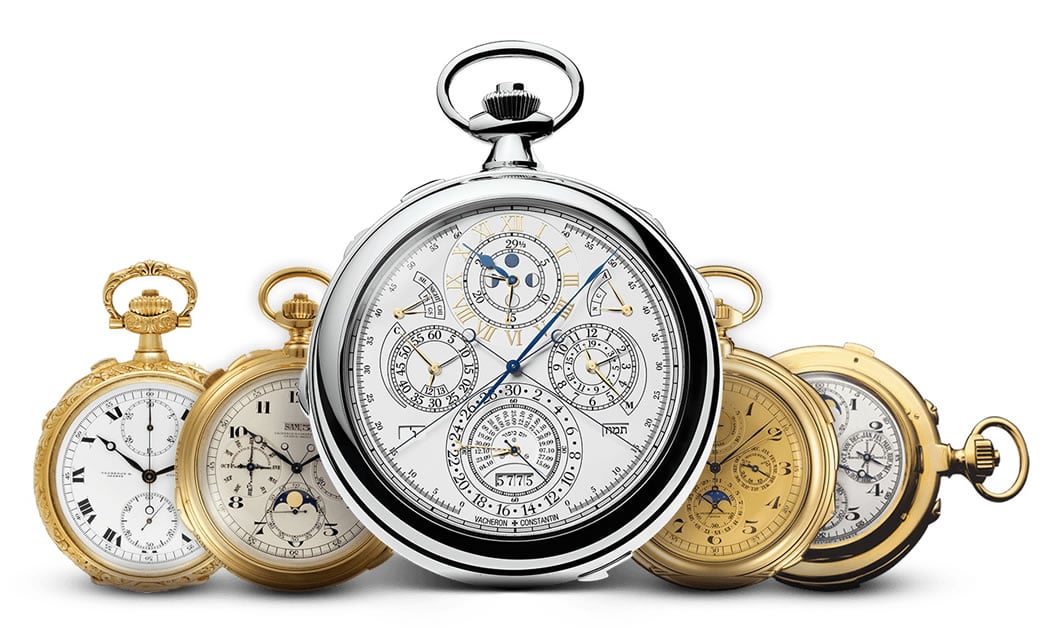 Vacheron Constantin
The 18-carat white gold encased Vacheron Constantin, designed for a private collector for the company’s 260th anniversary (founded in 1755), is a one of a kind old school pocket watch and judging by its current status as the ‘World’s most complicated watch’, the eight years it took to make, seem well worth it. It features a total of 57 complications with some that the community says are entirely new to watch making. The company says the watch is “technically exciting and visually dramatic” and for all intents and purposes it truly is. 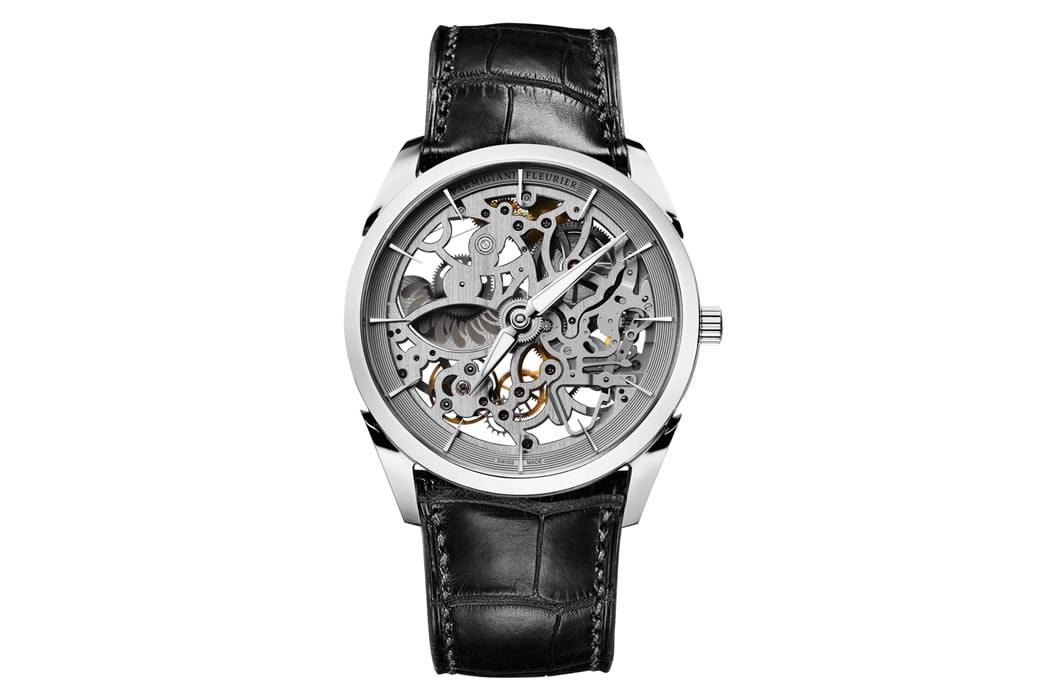 Parmigiani Tonda 1950 Squelette
The skeletonized Tonda 1950 is essentially a watch that’s been stripped down to its bare minimum to reduce it’s weight and thickness. It’s pure aesthetic gold to have a watch with all its working son display and somehow gives one the sense of futuristic appeal with all of the dials, gears etc. in motion while still maintaining the originality that goes behind a fine timepiece. The mainplate has been carefully machined by hand and has a very suave looking brushed metal finish. As watches go, this is one, if not the, slimmest option out there at just 2.6mm in depth. 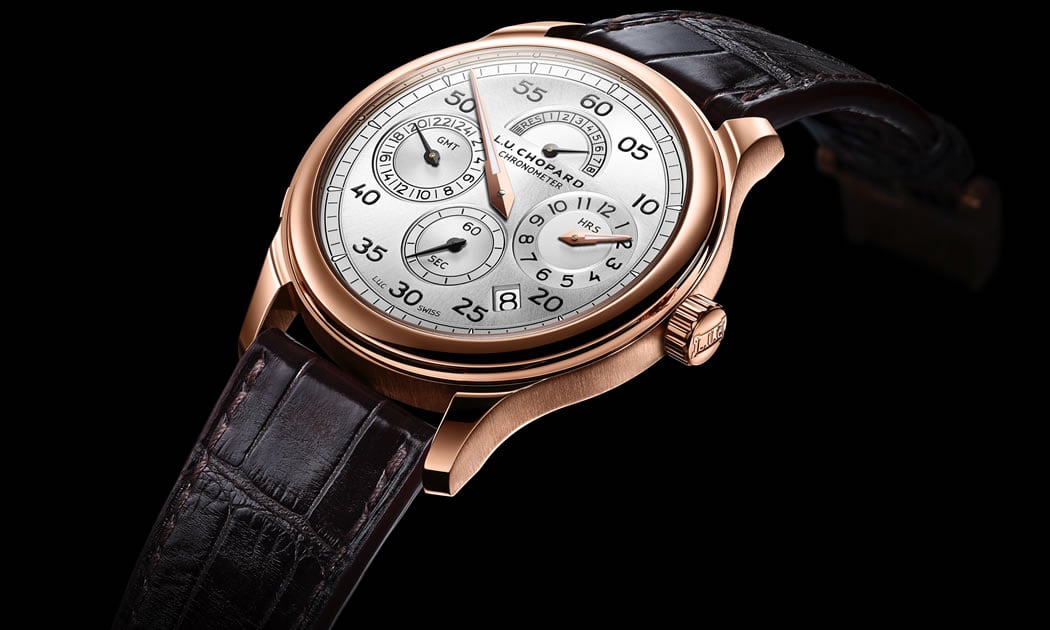 Chopard L.U.C Regulator
While the L.U.C Regulator from Chopard may not seem like the most exciting watch on this list, it is nonetheless a gorgeous piece of craftsmanship that is by far, nothing short of elegant, stylish, and exclusive while retaining the simplicity of telling time without complication. It’s gold plated minutes hand ticks away across the dial that features individual indicators for seconds, hours, GMT and a power reserve (216 hours) indicator at the 12 o’clock position. It’s padded with a hand-stitched alligator leather strap and an 18-carat red-gold buckle that is as classy as they come. 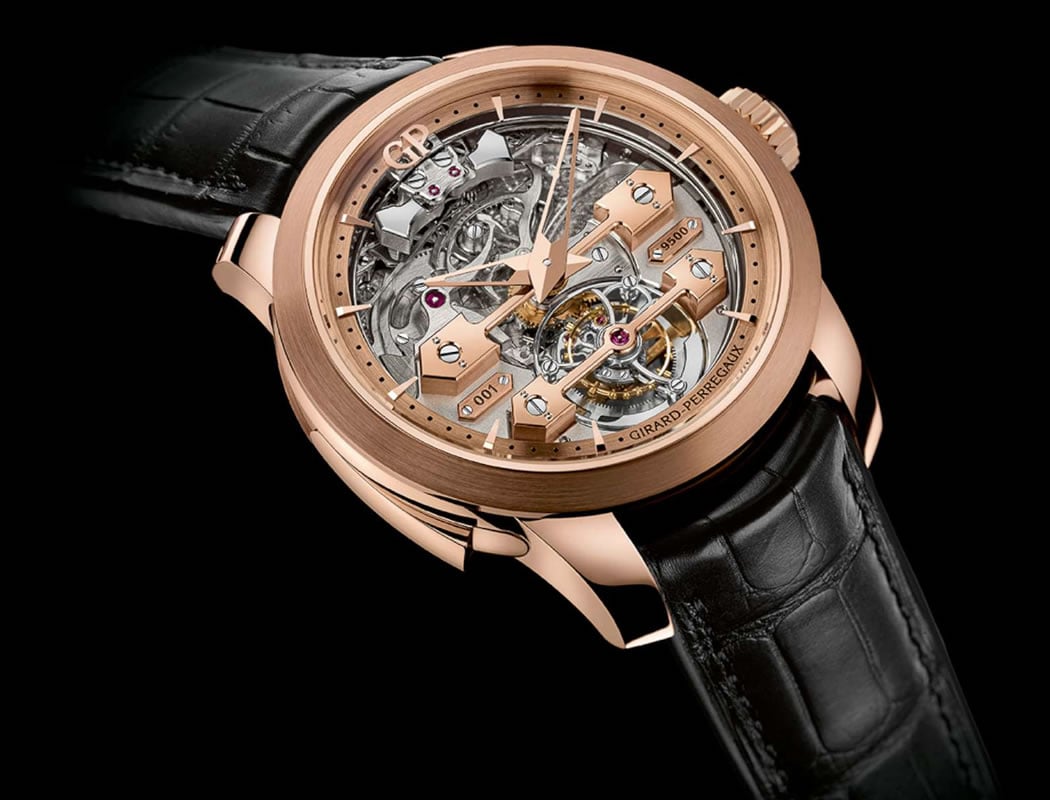 Girard-Perregaux Minute Repeater Tourbillon with Gold Bridges
The 10 piece only, limited edition timepiece from Girard-Perregaux is another skeletonised watch with its entire intricate workings revealed to the world sitting inside an 18K Rose Gold case. It’s encased with an AR-coated sapphire crystal with a sapphire display back and can withstand water up to 30 meters. The unique arrow-shaped bridges also in Rose Gold, accentuate the overall scheme of the design and the working aesthetics of the watch with the alligator leather strap with an 18kt rose gold triple-folding buckle is the icing on the cake. 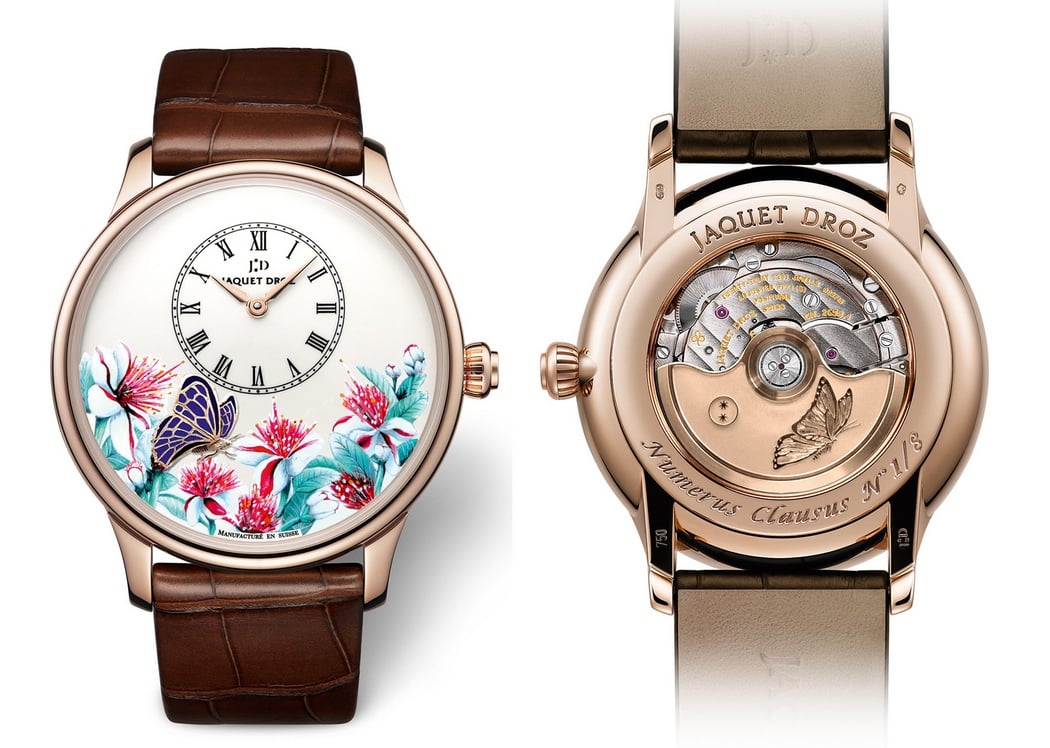 Jaquet Droz Lady 8 Flower
The Lady 8 Flower by Jaquet Droz is a work of art before it is time piece that’s extraordinarily crafted. True to its name the ‘8’ shaped watch features a meticulously crafted enameled or engraved Lotus flower set into a Sapphire glass encased dome above the primary dial and who’s petals open up at the push of a button. Inside the lotus is a diamond. The main watch dial showcases an elaborate butterfly with its wings spread set in blue Sapphires and portrayed against snow set diamonds. Two limited editions were designed and only 8 pieces of each are available for purchase. 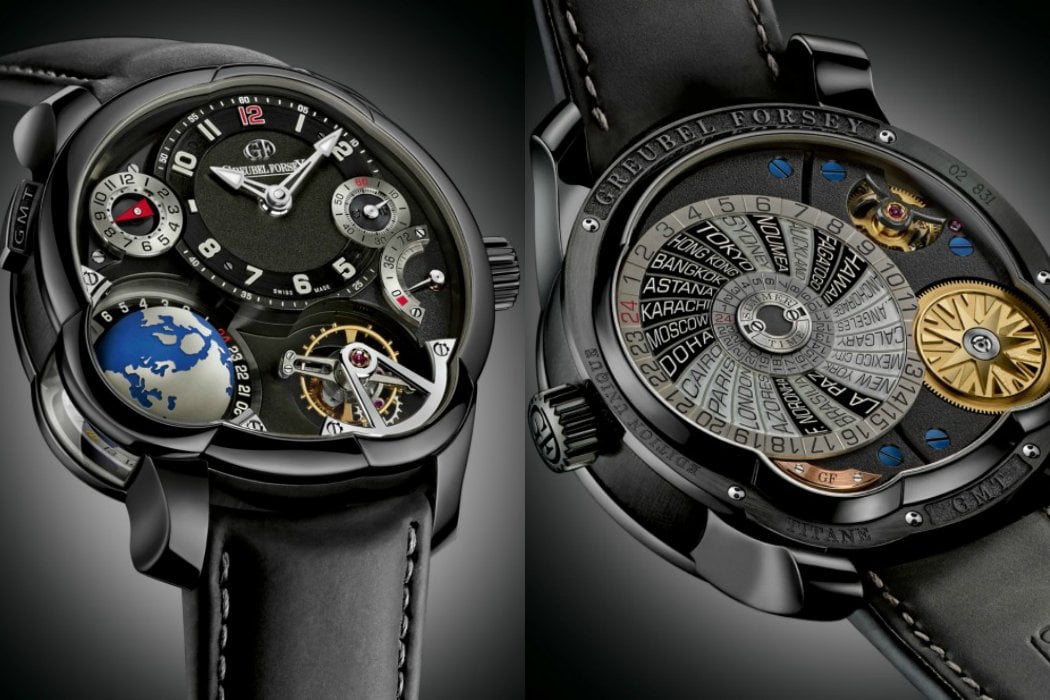 Greubel Forsey GMT Black
A remarkably unique watch, the Greubel Forsey GMT Black edition, with its 24 complications, sits snugly inside its black titanium case. While it might look a little overwhelming, the structure, with its three-dimensional globe worldtimer, power reserve indicator, detailed worldtime disc and moon indicator (on the back), the Tourbillon and all its other dials, the watch make use of all available space as uniquely and efficiently as possible. 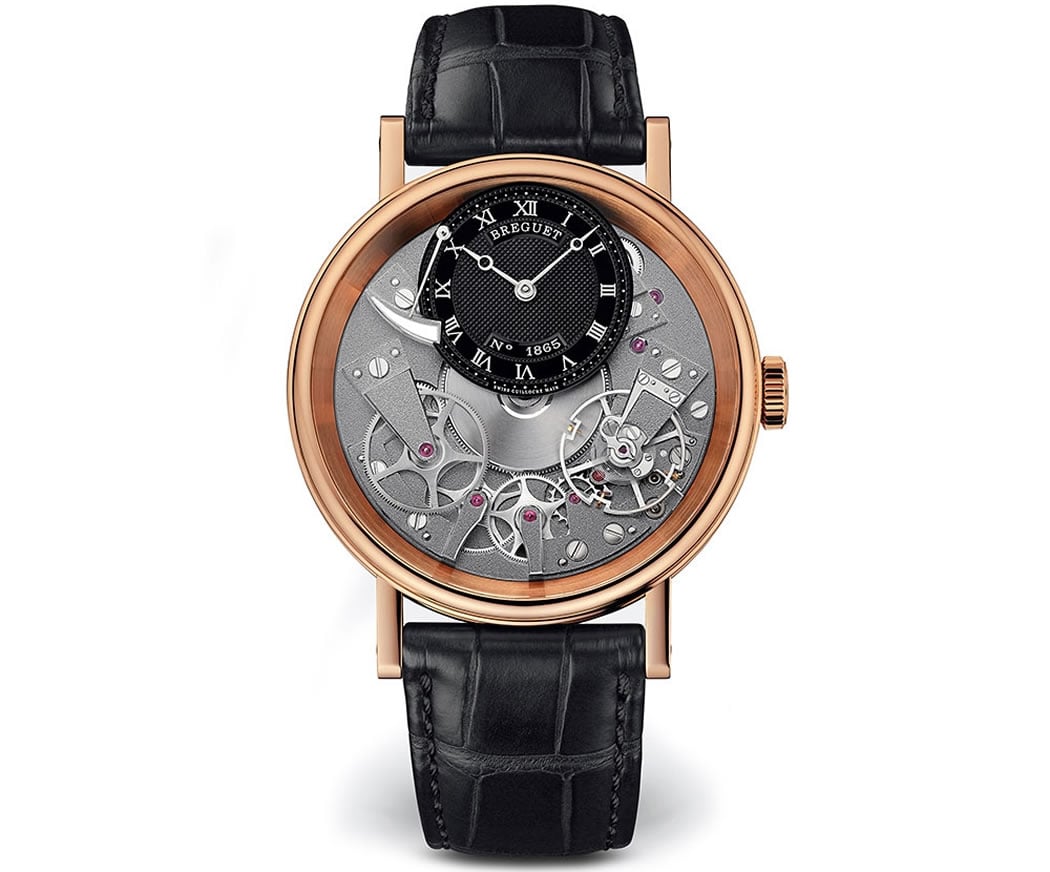 The Breguet Tradition Automatique Seconde Rétrograde
As a tribute to the legend i.e. Abraham-Louis Breguet, the Tradition series’ Automatique Seconde Rétrograde brings classic styling with visual elements that are both revealing as they are elegant. The white or 18k rose gold retrograde seconds hand presents an enticing design and with all complexities and movements made visible with the lack of a baseplate and its deeply engraved, black Roman numerals, the Rétrograde is quite a classy accessory as timepieces go. 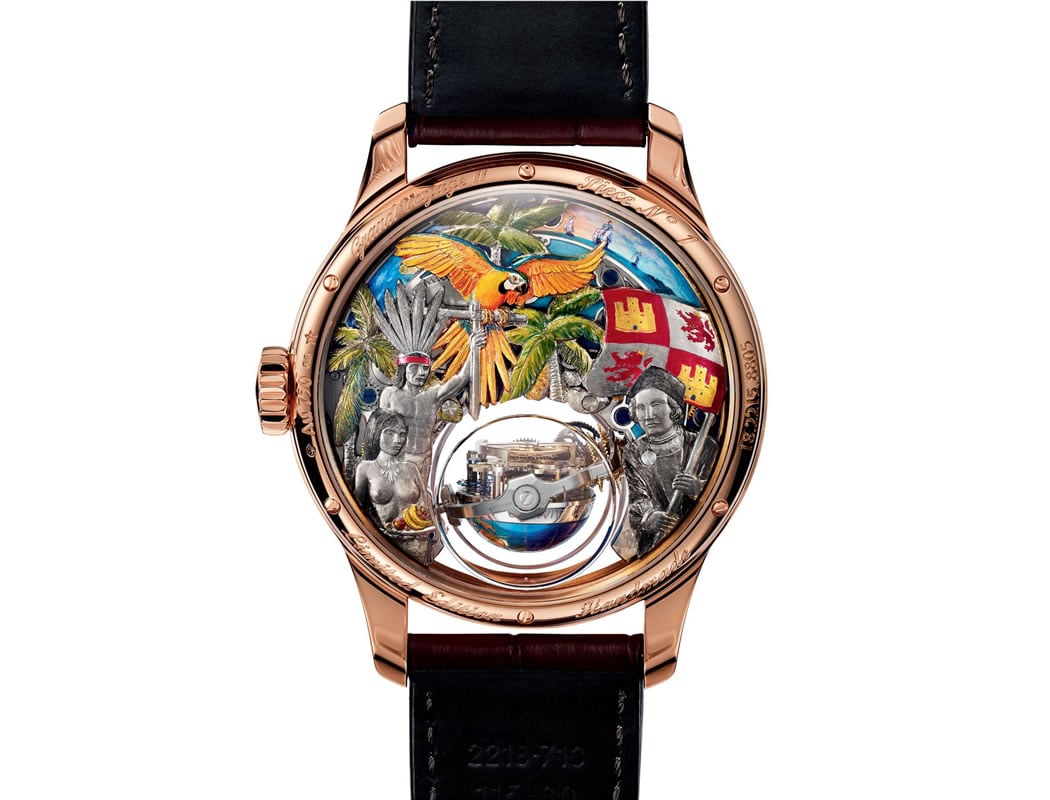 Zenith Academy Christophe Colomb Hurricane Grand Voyage II
To commemorate the great explorer Christopher Columbus, Zenith’s Hurricane Grand Voyage II has been meticulously crafted and stylized as what could be considered a mechanical work of art first and a timepiece second. The rear is home to a beautiful and colorful visage depicting the explorer, natives of the Indies, a parrot and the ships Niña, Pinta and Santa Maria painted into the background. The gyro is embedded in the 6 o’clock position and highlighted under a Sapphire glass dome. Brown alligator skin makes up the strap and is accentuated with an 18kt rose gold triple folding clasp.

READ:  The 10 best beaches in the world for 2016 according to Tripadvisor