When you have a fetish for collecting designer watches, then getting a watch winder is not a luxury but a necessity. But that doesn’t mean that you can’t go for a stylish one, like the Hublot Safe made by watch winder and safe maker Doettling called the Hublot Morphosis. Weighing around 180 kilograms, the cylindrical safe sports an inner tube that turns inside the outer shell, with two sets of winders that can hold up to 42 watches, 21 watches per panels.

The press release adds, “Once the owner has entered the correct PIN, the inner tube turns for 90 degrees and shows the first panel of 21 watches. After pushing the turn button, it turns for another 180 degrees and shows the second panel of 21 watch winders.” Created using steel with lacquered semi-matt Hublot black panels, the outer shelf, the base plate, and the watch winder panels are covered with real carbon fiber. You can opt for Hublot rubber instead of carbon fiber instead. It sports big “H” screws to remind you that it is a Hublot winder too. If you don’t have so many watches, the Morphosis can be equipped with drawers to keep jewelry instead. 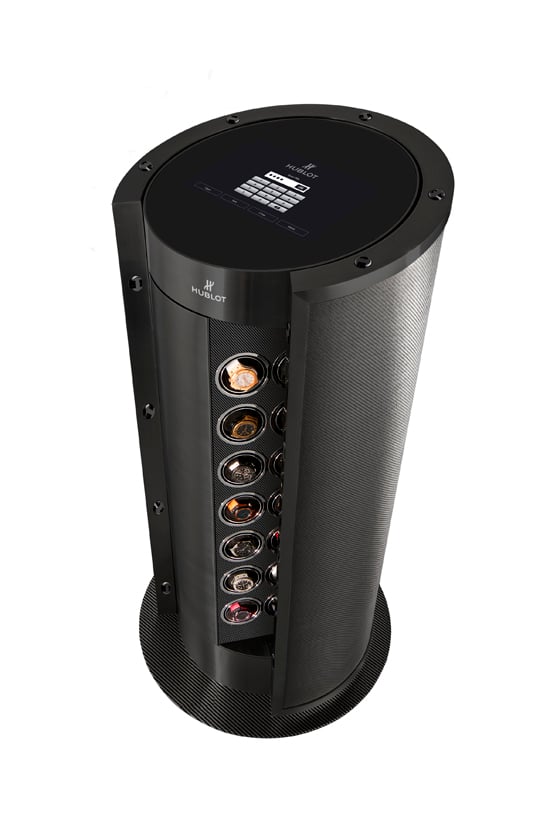 Like several other winders with a media center, this one also comes with a music system with an integrated iPad dock to control the safe’s functions and unlock it too. You can control the setup sans the dock if you are using a wi-fi system, with a pre-loaded custom app on the iPad that enables to activate functions such as turn direction (left, right, reversing), turns per day, sleep mode, boost mode (speed winding mode) and Pause. What’s more, you can also connect it with your home security system.

Tags from the story
Apple-iPad, Hublot