Watch brand Hublot is all set to expand its horizons, but also reminds us of its big-hearted nature. As the brand opens its 35th Hublot boutique, this time at Namiki street in Ginza, Tokyo, its first footprint in Japan, they had something for everyone. They brought along the “FIFA Winner’s Trophy for 2014 FIFA World Cup Brazil” that made its maiden appearance in Japan for the celebrations. They donated 10,000 sets of Swiss Caran d’Ache colored pencils to the Kids Earth Fund in Japan, an organization helping children affected by the tsunami. There is a fundraiser on-line auction in the offing, which will put a limited number “000 of 500” King Power Red Devil under the hammer to garner funds for children affected by the Tohoku Earthquake.

The boutique has been designed by Peter Marino and is conceptually similar to the Hublot boutique in Place Vendôme, Pari sand Madison Avenue, New York. Depicting fusion, the flagship store has been done up using bronze, natural buckskin, or ebony. The boutique will be the only location to put the “Vendome Collection” on sale in Japan. Hublot enjoys a special place in FIFA as “Official Watchmaker” and “Official Timekeeper,” which made them an obvious choice to unveil the FIFA Winner’s Trophy for 2014 FIFA World Cup Brazil. 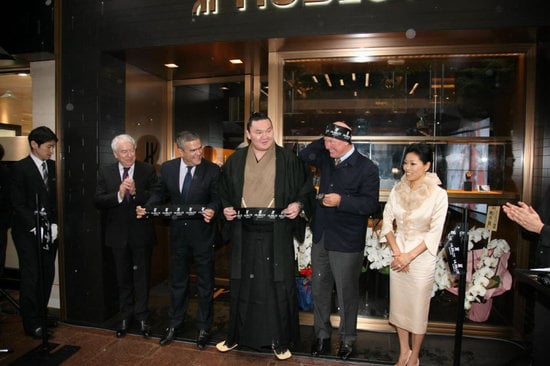