The Oscar-winning actress Nicole Kidman has agreed to extend the scope of her partnership with Omega. Omega has a worldwide partnership with Nicole Kidman, with the exception of the United States of America and Australia. Nicole Kidman will figure prominently in Omega’s “My Choice” advertising campaign and in select public appearances. Kidman and Omega also partner in their commitment to UNICEF. They initially celebrated this common ground with her first (hugely successful) public appearance in January, launching the new Omega Quadrella watch in Tokyo, and signing her watch for auction to benefit UNICEF Japan. Recently the US actress Nicole Kidman launched the new Omega collection -Constellation in Shanghai. 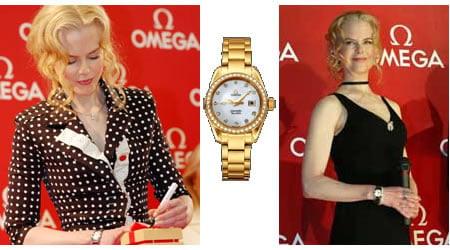 These brand ambassadors are chosen for the values they share with Omega and generally establish long-term, mutually beneficial relationships with the Swiss watchmaker.