The 21st of July 1969 at 2:52:20 GMT is one of the remarkable dates of history when Neil Armstrong stepped onto the moon and joined Buzz Aldrin a few minutes later on the Apollo 11 mission. In the following forty months, the world witnessed 10 more astronauts walking the moon. As a proud association with humanity’s greatest adventures, Swiss watchmaker OMEGA brought four of the surviving moonwalkers together and some of the other luminaries from NASA’s Apollo program. Among the pioneers were Buzz Aldrin joined by his colleagues Charles Duke (Apollo 16), Harrison Schmitt (Apollo 17), and Eugene Cernan (Apollo 17). Among the others were Thomas Stafford (Apollo 10), Apollo flight director Gerald Griffin, and James Griffin (the NASA engineer responsible for the rigorous testing which led to the OMEGA speed master’s selection as the only watch qualified for all of the space agency’s piloted flights.

Nearly forty years after the successful lunar mission, the astronauts shared several experiences relating to their rare and extraordinary feat, during which they talked about the OMEGA speedmaster which was part of each one of NASA’s manned mission since May 15, 1963. According to James Ragan, the Omega Speedmaster was the first and the only watch on the moon and also the only piece of hardware on Apollo, which was unmodified throughout the program. 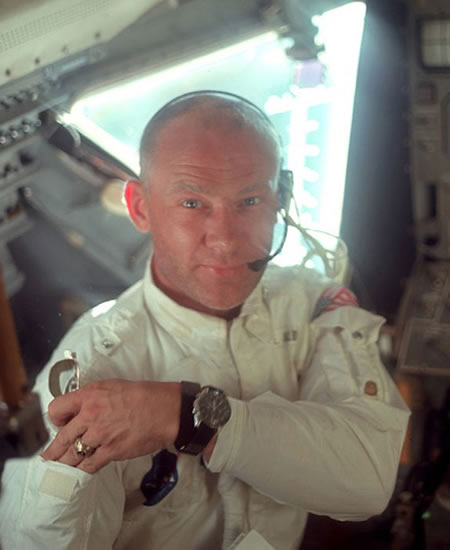