Not doing the usual, Panerai is known for that. And this time too its no different. Come February and the watchmaker unveils his special edition watches that pay tribute to two of the country’s most influential cities, Los Angeles and New York City. The highlight of the special limited editions would be the Big Apple and City of Angels images engraved casebacks. Created exclusively for the Panerai Beverly Hills boutique, the first set features an engraved case back depicting the quintessential, palm tree-lined Beverly Hills boulevard. The PAM 406 is a Luminor 1950 10 Days GMT – 44mm, of which only 20 models have been produced. The PAM416 is a Luminor Marina – 44mm, and 150 models of this style have been produced.

READ:  The Charles Oudin Full Amazone Curvex Women's Watch is quite an eyeful

The second set, available exclusively at Panerai New York, is personalized with a case back depicting the iconic Statue of Liberty. The PAM 407 is a Radiomir 8 Days – 45mm, of which only 20 models have been produced. The PAM417 is a Luminor Marina – 44mm, and 150 models of this style have been produced. The models will be priced between $5,100 to $17,900.
Pick your favourite city! 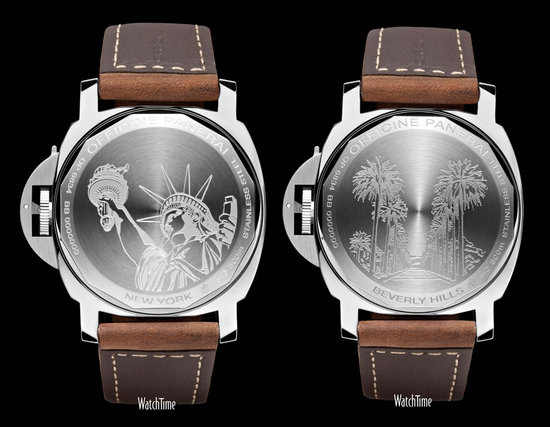 Will Donald Trump miss the Air Force one? The outgoing president’s $100 million private jet has gold played seat belts, a mini cinema and a lot more