Both Officine Panerai and Louis Moinet unveiled astounding planetarium inventions this week. Panerai revealed the “Jupiterium” based on Galileo’s interpretation of the solar system at the SIHH (Salon International de Haute Horlogerie). At the same time, Louis Moinet introduced its “Meteoris” planetarium depicting the entire solar system at the Geneva Time Exhibition. Both multimillion-dollar creations, they are sure to bedazzle one and all.

The Jupiterium, which was unveiled for the first time at the Nobel Museum in Stockholm, shows the positions of the stars, the sun, the moon, and Jupiter from the observer’s point of view on Earth, which is at the center as it was thought to be by Galileo. The timepiece boasts of the “Medicean Planets,” namely the planet’s four main satellites, observed for the first time by Galileo Galilei through his telescope. Powered by a perpetual calendar watch with a 40-day power reserve, the Jupiterium mechanism boasts a titanium base. The unique creation consists of a square wooden base that supports a glass sphere holding the Earth and planets on titanium arms. The unique Jupiterium is limited to just three units. Only one is available for sale while one is on display in Italy’s Institute and Museum of the History of Science in Florence, and Panerai is keeping the other one within the brand.
The Meteoris planetarium from Louis Moinet displays the entire solar system (all known planets orbiting around the sun), along with four tourbillons. Rémy Chauvin, a mechanic who specializes in gears, is the genius behind this exemplary creation. He has designed the Meteoris based on a previous astronomical clock he designed and manufactured, which took 14 years to complete and is now in the Watch Museum in Morteau, France. Created in two years, the Meteoris rotates faster to provide a better understanding of the solar system, while this acceleration of the planets enables the Earth to rotate around the sun in 37 seconds instead of the usual 365 days. What is more, each of the Louis Moinet tourbillons included with the piece contains material from legendary meteorites, including a meteorite from Mars; the oldest meteorite ever found on earth, Rosetta Stone; Itqiy, a mysterious asteroid that was formed near the sun; and a lunar meteorite.
Both exclusive creations, they come with astronomical prices as well. The Meteoris planetarium along with the four tourbillions is priced at $4.7millon while the “Jupiterium” is priced at $2million. 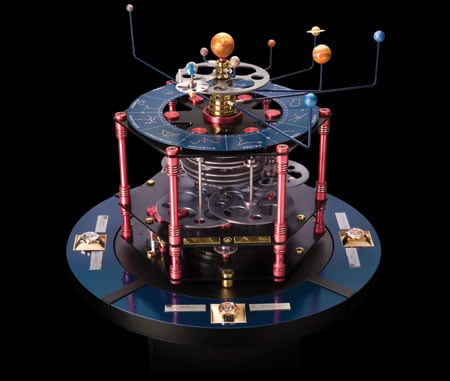 Tags from the story
Louis-Moinet, Panerai