Watch maker Michel Parmigiani was so inspired by the new Bugatti Veyron Grand Sport Vitesse unveiled at the 2012 Geneva Motor Show that he and his team created a watch model inspired by the car- La Bugatti Vitesse. The watch with a legendary PF372 movement has a perpendicular time display and a complex mechanism reminiscent of the Parmigiani Fleurier timepiece. The Bugatti Vitesse is reworked to embrace a more masculine and almost paramilitary profile that is typical to a sports car. It is composed of titanium throughout and the dial is fabricated with Texalium, which is a more reflective material than the carbon fiber which is usually the first choice for the Bugatti Super Sport.

The Bugatti Vitesse encapsulates the notion of speed perfectly with indexes that are spindle-shaped between 3 and 9 o’clock, conveying the impression of acceleration. Jewels are a must to every spectacular watch and Parmigiani has finished off the element perfectly with two cabochons of carnelian and lapis-lazuli stones set on the crown. The cabochons- either blue or orange in color, are engraved with the initials of Parmigiani Fleurier. 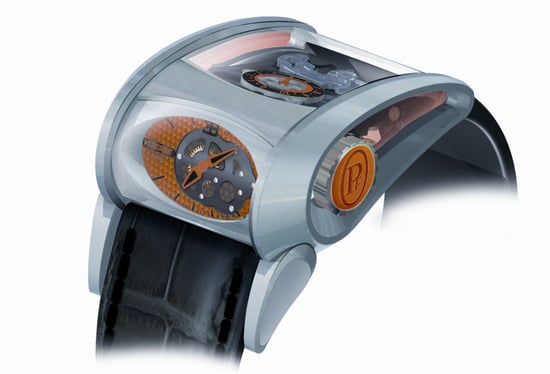