RJ-Romain Jerome adds to its spellbinding collection of Titanic-DNA five new colorful and sporty timepieces. Although the design aesthetics of the collection have been kept intact, the new collection appears in colorful avatars, the likes of red, yellow, blue, green or orange. These colors are evident on the inner bezel ring as well as the sides of its black alligator straps. Christened the Steampunk Chrono, the collection has also alongside launched a set of matching accessories – colorful steel cufflinks. 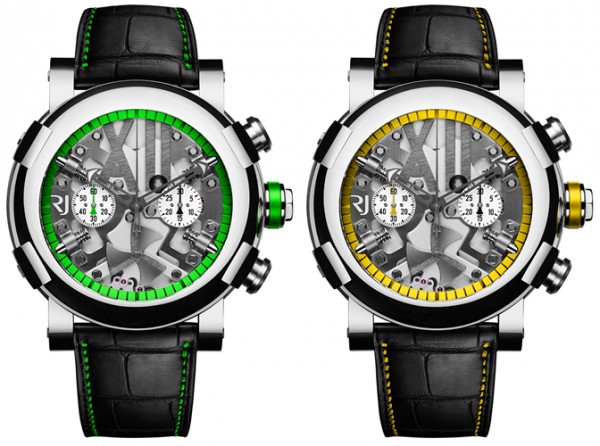 The Steampunk Chrono is a limited edition of only 99-pieces in each color. Set within a 50-mm diameter case, the watch comprises of 330 parts that have been held together by four screwed pistons. Powered by a mechanical self-winding movement, developed specifically for RJ-Romain Jerome, the timepiece runs on a 42-hour power reserve. The polished steel used for the bezel is authentic and has been acquired from 3,840 meters beneath the ocean as well as from Harland & Wolff shipyard in Belfast, where the Titanic was built a century ago. As a highlight, the watch also sports at 6 o’clock a mobile propeller paying its tribute to the majestic propellers of the Titanic.

The launch of the Steampunk Chrono has also been accompanied by the unveiling of steel cufflinks, that too in five colors, issued in two 99-pieces limited series. True to the collection, these also sport propellers placed on the steel disc that is yellow, red, blue, green, or orange lacquered depending on the version, and contains steel from the Titanic as for the bezels of the timepieces. These Titanic-DNA cufflinks are priced at $600, while the Steampunk Chrono Colours are tagged at $15,950. 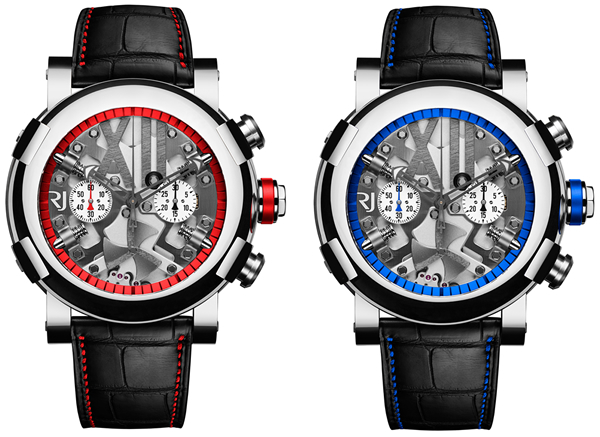 Tags from the story
Cufflinks, Romain-Jerome