The world of watches has always been a fascinating topic; the intricacies that go into designing a watch are simply brilliant and with the craftsmanship on some, it’s no wonder prices range in the thousands of Euros and Dollars for state-of-the-art timepieces. But the one we’re discussing here is by far one of the most unique we’ve seen and if you happen to be a connoisseur (fan-boy, in laymen’s terms) of the action figure genre, then you won’t want to miss out on meeting Melchior, the one foot high MB&F robot watch. These are the guys that brought us such marvels as the awesome looking Black Megawind FE, the Horological Machine No.6 (definitely one of their more complicated designs) and the MusicMachine 2 which is a replica of the USS Enterprise, but not a clock or watch of any kind, just a music box for fans of the show. 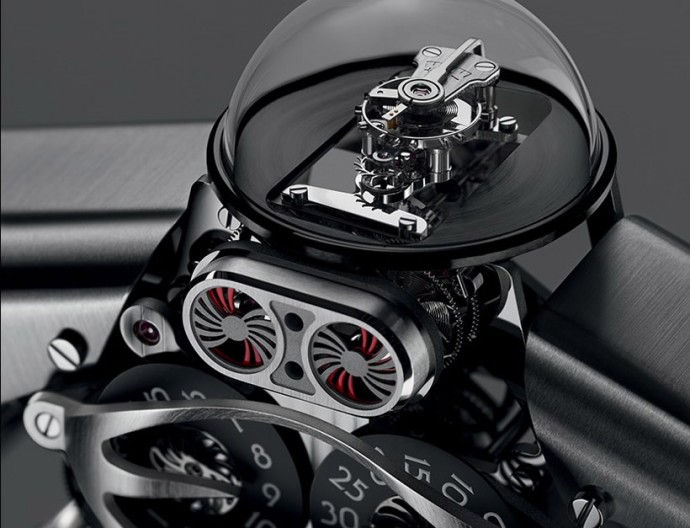 Designed in collaboration with L’Epée to look like a mini robot that’s hell bent on destruction from your desk, it looks like something out of a comic book or sci-fi movie. Melchior’s Swiss makers have very neatly positioned the regulating system (balance and escapement) at the top, under a glass dome, depicting what looks like a working computer-brain for the little robot. The audible ticking only gives his persona a little more pizzazz. His eyes are showcased by two dials with red markers highlighted. These markers have been set to count up to 20 seconds before snapping back to zero. On his chest is where you’ll finally find some digits, cementing the fact that he is, in essence, a clock and not some doomsday countdown timer. One disc has digits up to 12 to signify hours and the second goes up to 60 (in multiples of 5) for minutes. The time is highlighted by the two numbers that appear side by side. It’s all quite neat.

READ:  Hublot ups the ante with a $5 Million watch for women 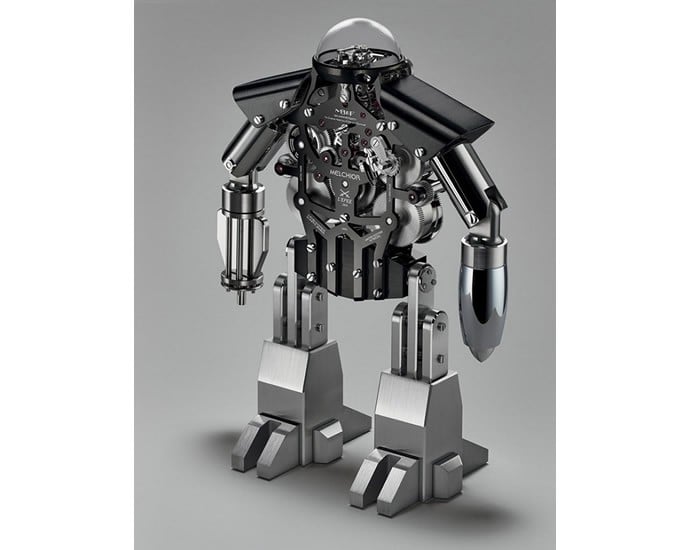 Melchior can run for up to 40 days (wow!) before he needs a quick wind up. To do this just unhook his Gatling gun arm as it “transforms” into as a winding key for the little guy. He’s powered up by five power barrels situated around his torso. His other poseable arm features what looks like a rocket or some sort of high-powered laser blaster of some kind. We don’t quite care as it looks fabulous!

READ:  This diamond encrusted Bvlgari Il Giardino Marino timepiece will immerse you in a maritime dream

Melchior has been designed to celebrate the brand’s 10th anniversary and according to a report, MB&F founder Max Busser mentioned that he came up with the design simply because, like Luke Skywalker or his father before him, he always wanted a little robot friend. The craftsmanship that’s gone into Melchior’s design is exquisite and it’s no wonder it’s priced at $35,750 (35,000 Swiss francs), and to top it off, since he’s only going to be available in 99 editions, it makes him even more of a “must-have” item. Incidentally MB&F actually made one hundred pieces; however, one piece will be generously donated to a charity auction later on in the year. Melchior was showcased at Baselworld 2015.