Sports and luxury watch brands have such a long history that watching sponsorship is essentially a sport in itself. With the US Open in full swing, I’ve picked the currently ranked top three men and women players to showcase the watch brand in their corner. We have Djokovic with Audemars Piguet, Nadal with Richard Mille, and Federer with Rolex for the men. We have Caroline Wozniacki with Rolex, Kim Clijsters with Citizen, and Maria Sharapova with Tag Heuer for the women. Sadly, Vera Zvonareva, who is currently ranked second, does not have a watch sponsor. That bumps up the current number four, Maria Sharapova, to take her place. Lucky for us, she’s also a very photogenic Russian who has Tag Heuer backing her up. 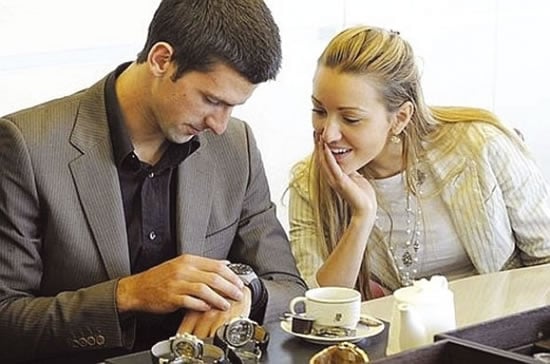 Mens #1: Novak Djokovic with Audemars Piguet
After his huge Wimbledon victory over defending champ Nadal, Djokovic is the newly #1 ranked mens player. At the start of the US Open this week he was officially named the brand ambassador of Audemars Piguet – a perfect matchup of one of the most renowned watch brands in the world with the current top player in the world. With Djokovic newly signed and Audemars never one to rush their craft, we don’t expect to see a signature watch released for him for another year or two.
Audemars has had their eye on this serious challenger to Nadal, Federer, and Murray for a while now. Their public relationship started earlier this year with Audemars’ co-owner, Pierre Bottinelli, sending a helicopter to bring Djokovic and his gorgeous girlfriend, Jelena Ristic Audemars workshop in Brussels. Djokovic, already a fan of the brand, was given an exclusive tour of the legendary workshop and a nice little parting gift. The gift happened to be the new ultra-exclusive Royal Oak Carbon Concept Tourbillion, valued at over $200k. Djokovic returned the favor by gifting Bottinelli his winning racquet from this year’s Australian Open.
This watch stands as an impressive feat of craftsmanship, with the big 44mm case being built from forged carbon, ceramic, and PVD-coated titanium parts. Along with the tourbillion, it features a linear-counter for the chronograph. The result is something that looks less like a watch and more like a piece of dark matter you strap to your wrist. So, if you want to have your own personal black hole to tell the time, save up $200k or become the #1 ranked tennis player in the world. 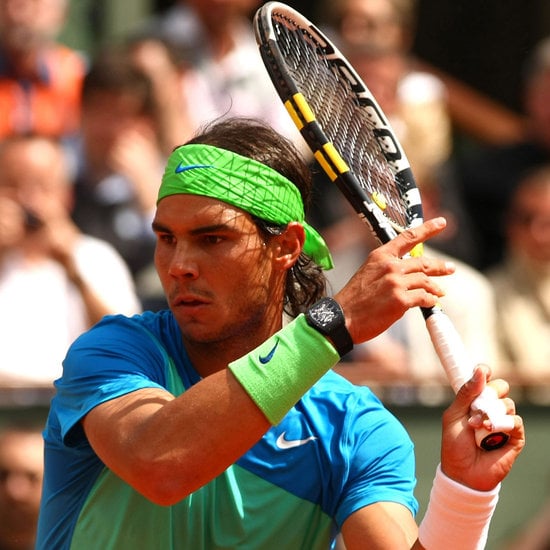 Mens #2: Rafael Nadal with Richard Mille
Nadal was recently dethroned by Djokovic from his top spot and now holds at number two. Already considered one of the greatest players of all time, Nadal has won 10 Grand Slam Titles, 19 ATP World Tour Masters tournaments as well as the Olympic gold medal for singles in 2008. He is also the third player to ever achieve a career Golden Slam by winning the French Open, Australian Open, US Open, Wimbledon and the Olympic Gold.
Nadal’s Partnership with luxury watchmaker Richard Mille has sparked much debate since he started wearing his signature watch for every tournament in May 2010. With no need to wear a watch during a tournament, considering the big clock with the score on it, some fans complain that it’s showing off and disrespectful to the game. One thing this high-tech watch hasn’t done is affect his game. Designed for Nadal, the RM027 features a tourbillon for extreme accuracy, so it has no problem with all the winning he does on the court. The watch is forged from carbon-composite, titanium, and a trademarked lithium alloy called LITAL, consisting of aluminum, copper, magnesium, and zirconium. With materials normally used for spacecraft and satellites, this watch is ultra-strong and weighs only 20 grams (13 without the strap). For a watch that can actually float on water, it will cost you around $500k.
Nadal recently made headlines with this watch after his recent win at the 2011 Monte Carlo Championships. He met a 15-year-old boy who has Muscular Dystrophy and, as a symbolic gesture, he handed the watch over to the boy. The watch will now be part of the Only Watch auction and Monaco, where all proceeds go to benefit Muscular Dystrophy. This is a huge donation by Nadal, but it’s still NBD for him, seeing as he gets these babies for free. 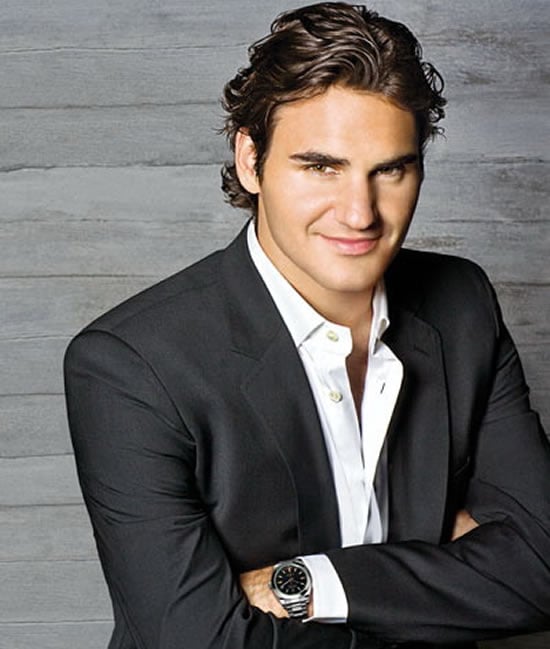 Mens #3: Roger Federer with Rolex
Just behind Nadal is the third-ranked Roger Federer; he is also considered to be one of the greatest players to wield a racket. He has captured a record-setting 16 Grand Slam titles, 17 ATP Master Series tournaments and is one of seven men to achieve a career Grand Slam (winning Wimbledon, the French, Australian and US Open).
Federer leads Rolex’s elite team of tennis ambassadors and is never seen without one on (except when he’s playing). He was originally sponsored by Rolex in the early 2000s but was swayed by Maurice Lacroix, another Swiss watchmaker, who created Federer his own signature model. Rolex managed to get Federer back on their team in 2006 with a huge multi-year endorsement deal. They haven’t created a signature watch for his name yet, but they did give him an interesting model that made its return after 20 years with a commercial starring the man himself.
The Rolex Oyster Perpetual Milgauss was first created in 1956 and was discontinued in the late 80s before its re-release in 2007. This watch was designed to work in power plants, laboratories, or medical facilities where electromagnetic fields can affect a watch’s timing. The word “Millgauss” comes from the Latin word mille, meaning one-thousand, and gauss, a unit of measurement for magnetic fields. The watch is built as a “Fraday cage,” an enclosure that can deflect electromagnetic radiation. The version offered with the green sapphire face was the first watch to use a true colored sapphire and gives it a unique green glow. 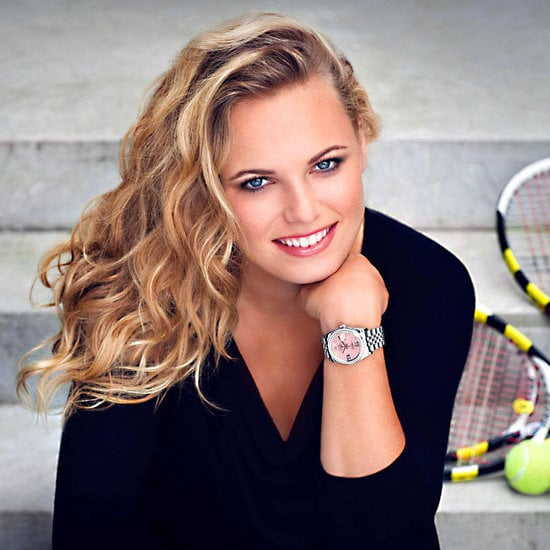 Womens #1: Caroline Wozniacki with Rolex
This relative newcomer, with her debut to the WTA in 2005, has held down the #1 position for almost a year. She has yet to win a Grand Slam title but had won 18 WTA singles titles and she just turned 21. The rising star has already picked up several big name sponsors, which has put her in second place on Forbes Magazine’s highest paid female athletes list for 2011.
Caroline was quickly signed in 2010 to a growing team of tennis ambassadors that catching up to the number of Rolex watch models available. Caroline has admitted she’s been a big fan ever since joining the team. Her Rolex of choice is the ladies Datejust. This classic Rolex model was the first wristwatch to display the date when it was introduced in 1945. Note she doesn’t wear the traditional ladies’ small-faced 26mm model; she rocks the blinged-out with diamonds, man-sized 36mm model. This young star already has a rep for balling out: she was spotted with a big diamond ring, and when asked by the press if it was a gift from a special someone, she said she bought it for herself. 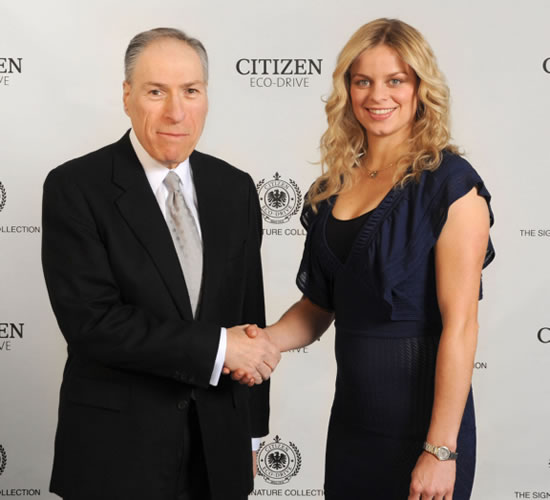 Womens #3: Kim Clijsters with Citizen
Kim Clijsters is one of best female players of all time with Time Magazine already naming her as one of the “30 legends of Women’s Tennis”. Kim, 28, turned pro back in 1997 and retired in 2007. After having her first child in 2008, she returned triumphantly to win the 2009 and 2010 US Opens and then the 2011 Australian Open. She has racked up a staggering 41 WTA singles titles and four Grand Slam titles.
Along with hosting the US Open, Citizen signed Kim after she came out of retirement to win the 2009 US Open. She represents the Citizen Signature Collection, which is Citizen’s first luxury collection of eco-drive watches. The Signature Collection also uses Citizen’s eco-drive system that powers the watch through any form of natural or artificial light. This collection steps up Citizen’s game with several high-end models, including a grand complication model. Her model is the Octavia Diamond, which features 57 diamonds. 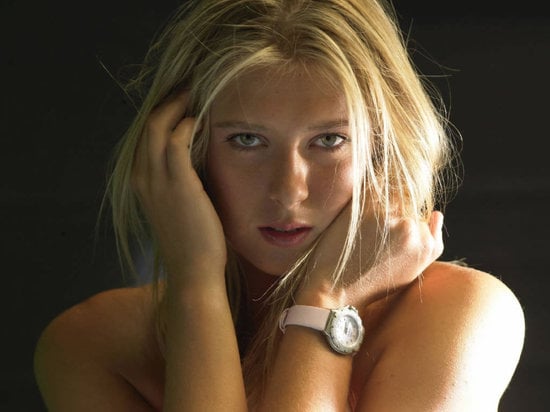 Womens #4: Maria Sharapova with Tag Heuer
Maria Sharapova, born in Russia in 1987, has lived in the States since 1994. She stands as the most famous and one of the most successful female players in the game right now. He has won 24 WTA single titles and three Grand Slam titles. The victory that launched her into international stardom was that over two-time defending champion Serena Williams at Wimbledon back in 2004 when she was only 17 years old. Outside of tennis she modeled for many fashion houses, appeared in Sports Illustrated’s Swimsuit Issue and serves as a United Nations Goodwill Ambassador. Her winning skill and looks have earned her plenty of big name sponsors including Nike, Head, Evian, Sony, Tiffany & Co and Tag Heuer. This has earned her the top spot on Forbes Magazine’s highest paid female athletes list for 2011, earning $25 million in the last year alone.
Her signature Tag Heuer watch is the Lady F1 ceramic. The case is made of white ceramic with a polished steel bracelet using ceramic for the middle links. This sporty watch can include up to 120 diamonds on its larger 37mm frame. Maria influenced the design of this watch and has also helped design a line of Tag Heuer ladies’ eyewear.
There is no doubt that tennis is a sport that the world’s elite love, so luxury timepiece sponsorships should be commonplace for many years to come. So if you don’t see yourself stacking enough to pick up any of these watches, maybe it’s time to hit the courts.
This post is written by Simon Gerard