Swiss luxury brand Hublot has made another leap towards NBA. After collaborating with Miami Heat’s Dwayne Reed in 2011, they have now unveiled their first King Power Miami HEAT Chronograph. This timepiece is made of 18K King Gold which is obtained by adding five percent platinum to the melting gold resulting in an intense gold. It is contrasted by the color black, which makes up for other parts of the watch. The Miami HEAT timepiece with its 48 mm case features new movement with 48 central counter representing the four quarters in a Basketball game. The team’s red color is visible in the cleverly designed bezel, making it look like a basketball net complete with a basketball backboard push button. This first piece in the series numbered 000/200 also features the numbers of each Miami HEAT player in Jersey font on the watch’s back.

The Miami HEAT is being released in a limited edition only. Hublot, along with Miami Heat Captains Wade and Hasleem, will auction the watch during “An Intimate Evening with your Miami HEAT” fundraising gala. This gala will feature the whole 2011-12 team and a live performance by the one and only Patti LaBelle. All the proceeds from the sale of this timepiece will be given to the Miami HEAT Charitable Fund to benefit the South Florida Community. 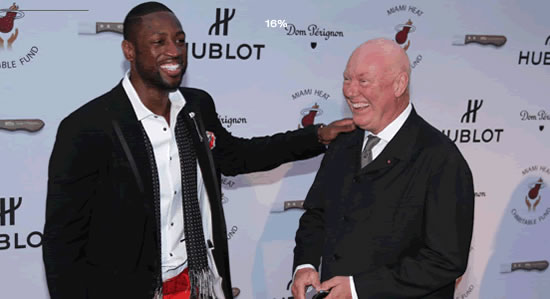 READ:  Hublot introduces the Classic Fusion Only Watch Britto for the 2015 Only Watch Auction