The supreme combination of power and wealth can alleviate you to acquire anything under this sun. So a lawyer who has millions at his disposal can place a finger on any car and acquire it too. John O’Quinn, an attorney from Houston has a very eclectic car collection, and he’s not shy about opening his wallet to add to it. This man who made a fortune in a multibillion-dollar Texas tobacco settlement spent $335,000 on a Batmobile used in the film “Batman Forever.” His other purchases at the auction included $250,000 for a 1938 Cadillac Town Car used by Pope Pius XII and $290,000 for a 1941 Packard limousine used by President Franklin D. Roosevelt. He also purchased the “Celebrity Gallardo” at the Kruse International collector car auction. The celebrity-signed 2005 Lamborghini Gallardo for $500,000 also made it to his garage. 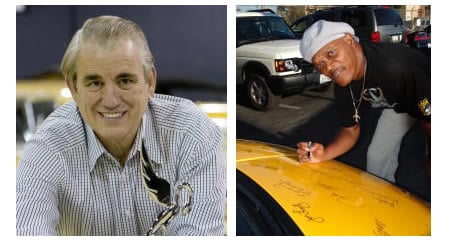 The Lamborghini, donated by the manufacturer, was signed by Regis Philbin, Hugh Hefner, Paula Abdul, Will Ferrell, Bruce Willis, and others as part of a fundraiser for the Child Safety Network. The money from the sale benefits the group, which develops educational programs aimed at preventing child abuse, abduction, exploitation, and injury. O’Quinn paid $690,000 at a Kruse auction in Las Vegas last year for a 1975 Ford Escort GL once owned by Pope John Paul II.
Source