This year marks the 50th anniversary of the Apollo 11 mission and we have already seen several highly collectible items related to the first manned mission to the moon hit the auction floor over the last few months. A few weeks back, auction house Christie’s announced that the original Apollo 11 Lunar Module Timeline Book will go under the hammer at its New York auction is expected to fetch close to $9 million. Now, another extremely rare item from the Apollo 11 mission is about to hit the auction block. The original 70 mm positive film roll from the Hasselblad camera used on the Apollo 11 lunar mission is up for grabs. The film roll has 126 of the most iconic images in color from the first lunar-landing mission that were taken by Commander Neil Armstrong and Lunar Module Pilot Buzz Aldrin during their historic two-and-a-half-hour EVA. The photos include moments from inside the Lunar Module Eagle right before Armstrong stepped off the spacecraft, his first photo after taking his famous first steps, Aldrin standing next to the American Flag and his legendary “Moon Man” image with his mask showing a reflection of Armstrong. 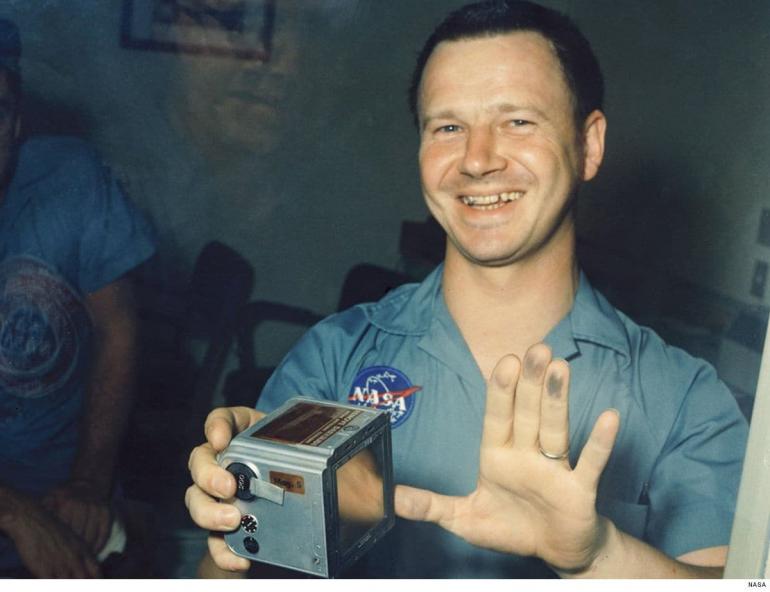 The roll is wound on a yellow Kodak holder and measures 3.5″ in diameter. According to RR Auction, the film roll was acquired from Terry Slezak, a member of the decontamination team at the Manned Space Center’s lunar receiving lab, who was in charge of processing the film brought back from the Apollo moon landings. The item will be a part of RR Auction’s Apollo 11 50th Anniversary auction that opens on 13th June and will run till June 20th. The roll has a pre-sale estimate of around $8000.