Some people often wonder why certain things (mostly memorabilia) garner very high amounts at auctions. For those who don’t comprehend these deep, almost fanatic interests, should check out something like this original boxed copy of Super Mario Bros that will take you down memory lane. If you happen to have both deep love for the game and also very deep pockets then there should be no reason to not get this baby home! Back in 1985, Nintendo released one of its first games for the NES and called it the classic Super Mario Bros. almost all kids from the ’80s and 90’s own cartridges of the game that’s still available to purchase and play but most never bought the game solo by itself. Heritage Auctions has what a rarity collector will go crazy for- an original boxed copy of the game on sale for $42k. It will interest you to know these games come with cardboard hangtabs. The US test market copies of black box games, used this packaging before plastic became a medium to seal the game. There are four sub-variants of the plastic sealed cardboard hangtab box and the one going under the hammer is variant no.3 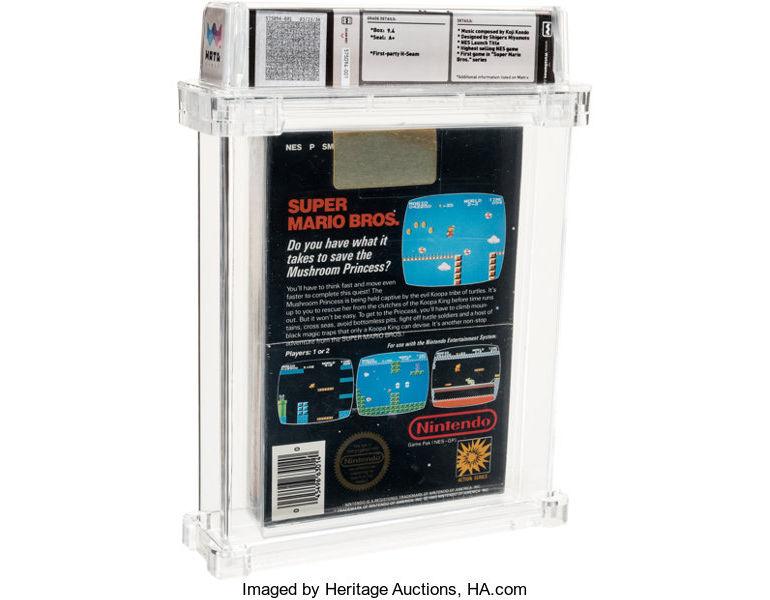 These weren’t in production for a very long time. Simply put, a Nintendo Entertainment game with a cardboard hangtab copy carries a true vintage demeanor unequaled by its successors. Super Mario Bros. is also a whole lot more special as one of the most loved, most popular and the highest-selling game on the console of all time. This Wata 8.0 sealed copy of Super Mario Bros. with a cardboard hangtab is estimated to raise a record-breaking $40,200. The auction ends on July 10th.

Update – The 1985 game cartridge of Super Mario Bros sold for $114,000 creating a world record as the most expensive video game ever sold at an auction.

Tags from the story
Super-Mario, Video-Games