Believed to be the wealthiest Emirate and also considered to be the richest city in the world, folks in Abu Dhabi also love to live up to this reputation. Businessman Saeed Al Khouri, a resident of Abu Dhabi has coughed up $14 million (52.2 million dirhams) for a license plate bearing simply the number “1”. Within minutes after the bidding began the price of the plate shot up to 26 million dirhams from the opening one million dirhams. When the bidding for No.1 surpassed 47 million dirhams, the competition was limited to two people Al Khouri and Yousuf Naser, a Dubai businessman. The addiction to this kind of bidding and acquisition runs in Khouri’s family as he beat a record set by one of his relatives in September. Also, a plate with No.5 was sold for 25.2 million dirhams to his cousin, Talal Ali Mohammad Khouri, also a prominent businessman.

This one-of-its-kind deal is also going to be submitted for Guinness World Records book. Proceeds from the auction will fund construction of a specialized emergency hospital in the seven-member United Arab Emirates. 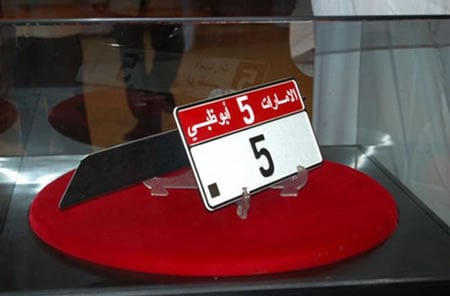