The coronavirus pandemic forced all the major auction houses like Sotheby’s, Christie’s, and Phillips to postpone their live auctions and pivot to the virtual world for their scheduled sales. It sounds like a nightmarish situation for these companies and those who planned to take part in their auctions. However, it seems the pandemic and the lockdown measures due to it have failed to put a dent to the business; or, at least, the auctions dealing with collectible cars are doing just fine. In fact, the recently concluded RM Sotheby’s online-only Driving into Summer auction managed to produced the most expensive car ever sold over the internet. The exclusively-online sale saw a pristine 2003 Ferrari Enzo with just 1250 miles on the odometer sell for a record-setting $2,640,000. 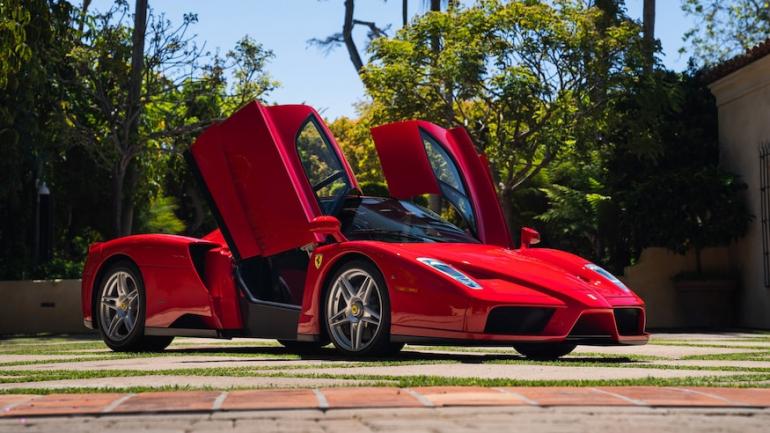 The two-day auction by RM Sotheby’s that ended on 29th May was the first-ever car auction by the company specifically curated for an online sale. As many as 126 lots went under the hammer on the last day, which included the record-setting Enzo Ferrari. The supercar bearing the chassis number 133033 is one of the only 400 examples of Enzo Ferrari that were ever built and it has had only two owners over its entire life, both based in California. The first owner had it for 15 years, and it’s not uncommon for such high-valued collectible cars to have low mileage, but 1250 miles is surprisingly low with an average of just 74 miles driven each year since it rolled off the production line. The halo car is powered by an F1-derived V12 engine that produces 651 horsepower and can propel the car from 0-60mph in 3.3 seconds. It also features the very rare two-tone racing seats with red 3D cloth inserts. On the very same day, another extremely collectible Ferrari exchanged hands at the RM Sotheby’s. The 1985 Ferrari 288 GTO managed to sell for a whopping $2.3 million.