Whiskey connoisseurs from across the globe are in for a treat! In a roll of sorts, the exclusive and world-renowned Hanyu Ichiro’s Full Card Series will now be available at the upcoming Fine & Rare Wine and Whisky auction in Hong Kong later this summer. Touted as the world’s most expensive and one of Japan’s rarest whiskey type, the collection is ardently waited upon and is expected to fetch millions on sale. 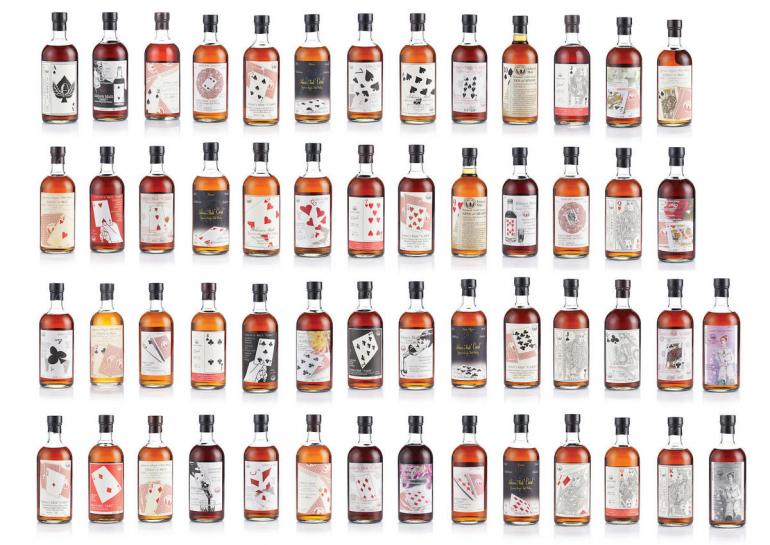 The coveted ensemble consists of 54 bottles of Scotch-style malt whiskey, each of which represents a gaming card from the praised distillery of Hanyu (currently dysfunctional). The bottles on sale belong to a lot of 400 premium whiskey casks which were specially preserved by Ichiro Akuto, grandson of Isouji Akuto — a 19th generation descendant of sake brewers and whiskey producers who founded the Hanyu distillery in 1941. Set aside for release between 2005 to 2014, each of these bottles will now be available for grabs at the Bonhams auction.

Commenting on the sale, Bonhams’ Asia Director of Wine & Spirits Daniel Lam said, “Four years since the Hanyu Ichiro’s Full Card Series set the world auction record at Bonhams, the current market demand is at its strongest for Japanese Whisky. It is believed that no more than four sets of Full Card Series exist in the world. Over the years, moreover, many bottles have either been consumed or strictly kept in private, making it harder than ever to assemble a complete – and with such trusted provenance – series.” The Hanyu Ichiro’s Full Card Series is expected to sell between $576,158-$768,210 USD.