British automaker Aston Martin’s flagship real estate project, the Aston Martin Residences tower in Miami, is nearing completion and it has finally revealed the interiors of the triplex penthouse through the first set of design renderings. Unlike the limited edition Aston Martin supercars, the ultra-luxe penthouse is still waiting to be snapped up by a wealthy buyer, which has an asking price of $59 million. While the jaw-dropping penthouse is worth every dollar, Aston Martin has decided to further sweeten the deal by throwing in a free Vulcan. Just in case you don’t remember the Aston Martin Vulcan, it’s a lightweight track-only supercar that debuted in 2015. The ultra-rare supercar is powered by a 7.0-liter naturally-aspirated V12 that produces 820hp. The production was strictly limited to just 24 examples, with each priced at $2.3 million.

Coming back to the penthouse, it takes up the entire 63rd, 64th, and 65th floors of the Aston Martin Residences tower. Not only does it come with its own 7,300 square feet of private outdoor space but with 19,868 square feet of space on the inside which includes a private pool, spa, and a personal elevator. The penthouse has been named Unique for its breathtaking bespoke interior design that has been previewed by the renderings. However, the buyer will be given the option to work with the brand’s in-house design team on the final details, including the penthouse’s seven bedrooms and eight bathrooms. 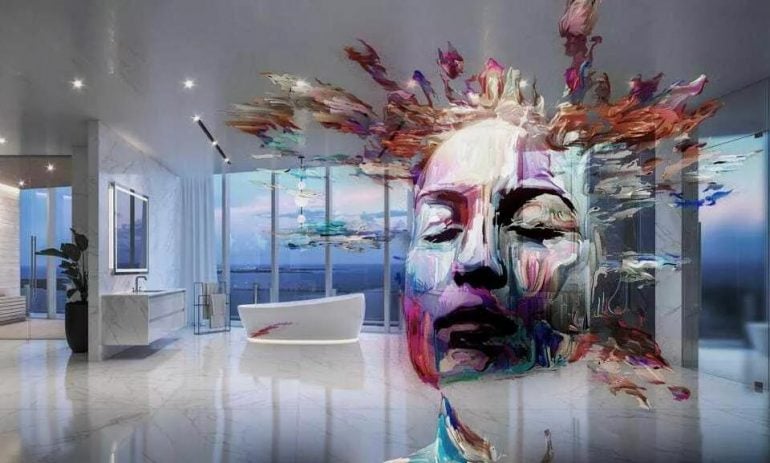 Furthermore, the buyer will also be presented with a limited-edition art book dubbed ‘Unique’ that will be full of historical Aston Martin photos and a photo of Queen Elizabeth II touring the carmaker’s factory. Additionally, the book will also include a QR code that will direct them to an original score commissioned by a 10-piece orchestra to capture the ambiance of the tower.