Monument, Jewel, or an Icon, Burj Dubai will be known by many names! But only a privileged group of people will call it home. If you have that opportunity, you are assured not just unparalleled luxury, but a place in history. The Arabic meaning for the word Burj is ‘tower’, which gives Burj Dubai a meaning of ‘Dubai Tower’ or ‘Tower of Dubai’. However, Emaar admits the Burj Dubai is unlikely to be the world’s tallest tower for long when it is completed in 2008. The $20bn tower, now 80 stories and 277m high, faces competition from other planned mega-skyscrapers in Dubai, as well as internationally. Emaar is still keeping its exact height a secret but has confirmed it will be at least 700m and 160 stories high. Although the total height is subject to change, an observation deck will occupy the 124th floor. 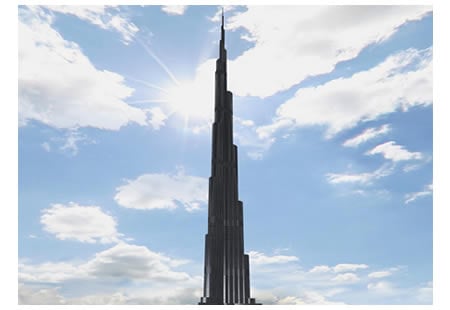 The building whose design was influenced by the six-petal desert flower was rotated 120 degrees to allow for less stress from the prevailing winds. Only time can tell which tower will covet the world’s tallest building…till then we are sure that this architectural phenomenon will be a global tourist magnet that skyrockets Dubai into the global limelight.