A new Apple Store under construction in Chicago has a unique feature built into the architecture of the building. This surprising design element was revealed to the world when the construction crew laid out one of its crucial features – a giant Apple logo. The roof of the flagship store in downtown Chicago is designed to look like a giant MacBook, and last week the construction crew had put massive Apple logo on the silver, rectangular roof, which stayed for less than an hour before crews rolled up the logo and removed it.


The building with the eye-catching roof is designed by London-based Foster+Partners and is a relocation of Apple’s original Chicago flagship store. Upon completion, the 20,000-square-foot store will feature an all-glass construction, and the thin walls and slim ceiling are described as an effort to blur the boundaries between what’s perceived to be inside and outside of the shop. The glass walls range between 14 to 32 feet in height, and are made out of four layers of half-inch thick glass joined with layers of stronger, thicker laminated glass. The first renderings of the store were originally unveiled in 2015, and touted the project’s “echo” to Prairie Style homes. “We wanted the building to be as light and transparent as possible,” Foster+Partners partner James McGrath told the Chicago Tribune. Apple has yet to reveal the opening date for the store.

New #flagshipstore #apple #applestore got the roof on #michiganave #chicago 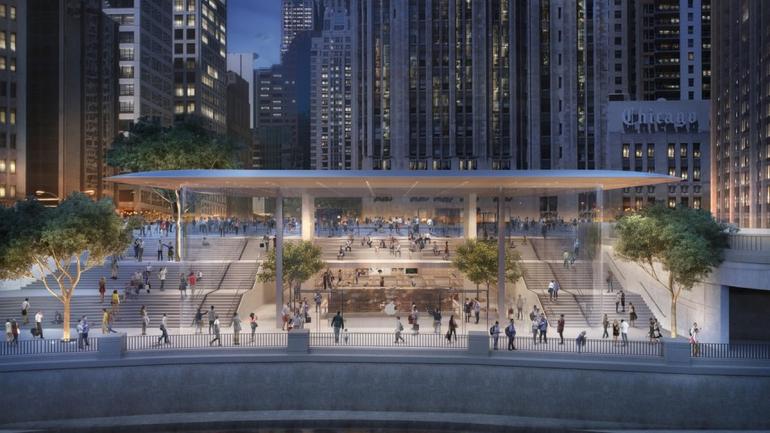 Tags from the story
Apple, Chicago