Kylie and her rapper beau – Travis Scott sure has a thing for the expensive automobile. After bringing in a customized ice-blue Rolls-Royce into the family earlier in the month, Kylie recently followed in by gifting daughter Stormi a custom-made mini Lamborghini as a pre-Christmas present!

Unlike the ordinary version, Kylie’s gift comes wrapped in an exclusive Louis Vuitton print with rainbow colored hues strewn all over. The baby convertible, black in color is decked with a multi-colored LV monogram and is matched by a complimenting jet-black interior. It happens to be Stormi’s second such gift, with the first being a child-sized electric convertible Ferrari that was purchased by her parents for a whopping $400. The mini-Lambo, on the other hand, is equally pricey and commands a heavy price tag of $389. Both the legendary cars were also shown-off by Kylie on her Instagram handle with a post captioned “Like Mother, Like Daughter”. 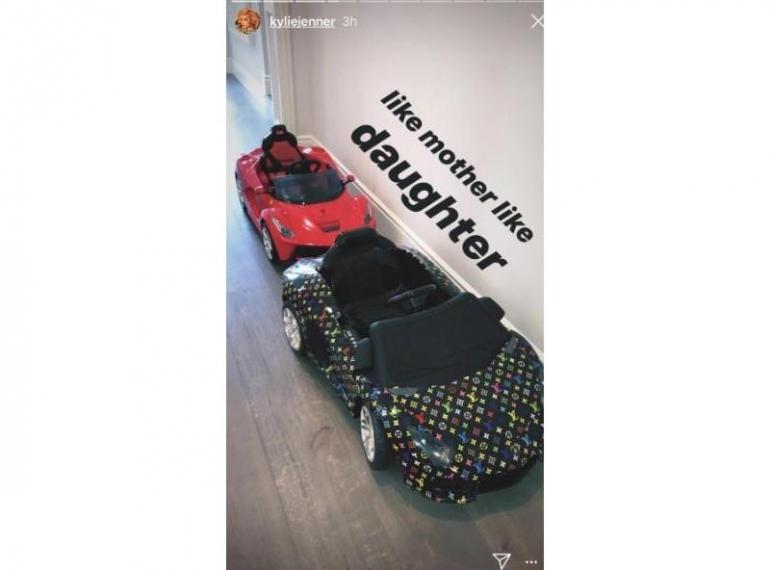 Scott who earns millions through his rapping career is known to spoil his family silly with lavish gifts of sorts. Earlier in the year, he gifted Kylie a $1.4 million Ferrari LaFerrari and a vintage Rolls Royce for her 21st birthday. He further followed the tradition through by gifting wifey Jenner a custom-made and uber-luxurious Rolls-Royce (that comes with a glittered ceiling and a monogrammed interior) on Christmas. With folks like these, 10-year old Stormi is sure to develop an early penchant for luxe wheels! Talk about being born with a silver spoon!