Tiffany Trump might not be the black sheep of the Trump family exactly, but she’s largely thought of as, well, not having quite as much going for her as some of her older siblings. But with the spotlight shining on after her father’s presidency and scandals tarnishing her siblings’ names, the 27-year-old only child of Trump’s second wife Marla Maples might just be the dark horse Trump who will come out on top. Here’s why …

Continuing the Trump University tradition
Donald Jr. and Ivanka both attended their father’s alma mater, the University of Pennsylvania – the Wharton School, to be precise. Ivanka initially attended Georgetown University in Washington, but she ended up transferring to UPenn after two years. It looks like Tiffany took note of how to stay in her dad’s good graces as she too went to UPenn before studying law at Georgetown.

Trump reportedly attended Tiffany’s 2016 graduation at the same time as Joe Biden, whose granddaughter Naomi also went to UPenn, putting Tiffany in the spotlight around six months before Trump went on to win the presidential election and Biden prepared to leave his vice-presidential office. That summer Trump also picked Tiffany to give a speech at the Republican National Convention – a move that surprised many.

Keeping family and business separate
Tiffany’s lack of involvement in the family businesses may look like a disadvantage to outsiders, but it could be a clever move on her part. While her siblings are potentially tangled up in their father’s legal troubles related to the Trump Organization and his presidency, Tiffany has been coy about announcing any plans to be employed by her dad. She has, however, used his massive platform to showcase her public speaking skills – which can pay very well – and work in criminal justice reform alongside the likes of Kim Kardashian.


Gaining influence
If anyone’s a great example of how social media influence can amass a fortune and open new career prospects, it’s a Kardashian. Tiffany was one of the original Rich Kids of Instagram and hung out with the children of other celebrities who showed off their wealthy lifestyles. She later switched up her strategy when her dad went into politics, and it has clearly paid off. In fact, in January, the same month Trump was banned from social media platforms, Tiffany’s Instagram following shot up by 25,000 in just four days – indicating an increased appetite for his youngest daughter. 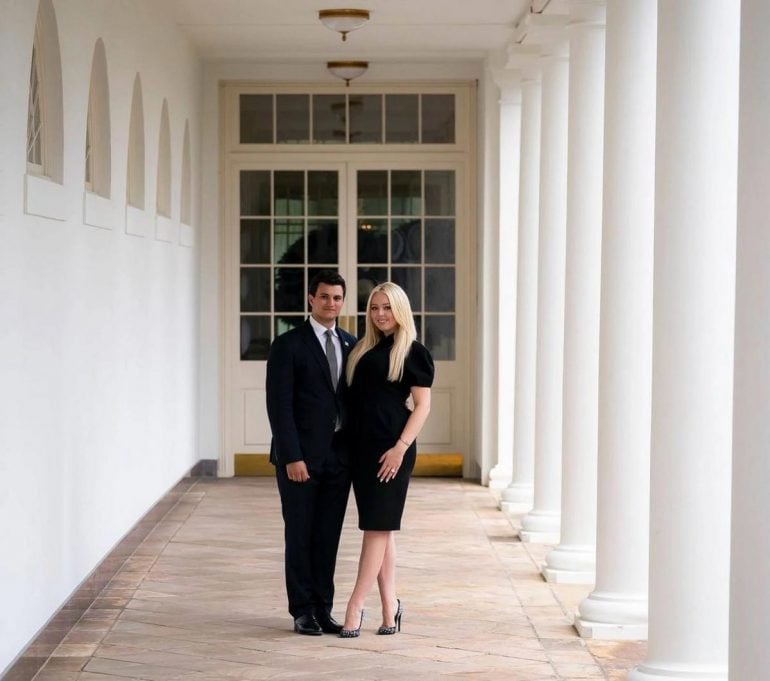 Marrying rich
Many criticised Tiffany for announcing her engagement to Michael Boulos on the final day of her dad’s presidency, but her choice of future spouse seems to be a solid one. Her dad’s claim of being a billionaire might be questioned at times, but Boulos and his family’s wealth seems to be the real thing; Boulos has a net worth of US$20 million, and his family claims he’s the heir to a billion-dollar fortune. So however much debt is reportedly mounting against her dad, since Tiffany has bagged a billionaire husband of her own, she shouldn’t have too much to worry about should the Trump house of cards come tumbling down.