A Scion, an heir to a billion-dollar fortune, the owner of Tiffany Trump’s heart, and the future son-in-law of Donald Trump, the most talked-about man in Tiffany’s life, meet Michael Boulos! At 23, the man has a lot to handle, a love life that’s garnered the public spotlight, and a multibillion-dollar conglomerate called SCOA PLC, which runs several companies that operate across West Africa. For the past 15 years, Michael Boulous has been listed as an associate director at the family company.

The Boulos background
Growing up, Boulos lived in Nigeria after moving there from Lebanon. After graduating from the glorious American International School of Lagos, Michael attended college at Regent’s University London, where he studied Global Business Management.
At 19 years old, Michael was named the associate director of SOCA Nigeria, a conglomerate active in furniture production and interior design, automobile assembly and distribution, power generation, retailing, and trade. With his businesses spanning the globe, Boulos divides his time in London and the United States with Trump.


July 2018- There were rumors of them having met at Lindsay Lohan’s infamous beach club in Mykonos, where both were partying over the summer and hit it off instantly.
November 2018- Tiffany took the relationship public by inviting him to Thanksgiving with her family at Mar-a-Lago.
January 2019- Their romance was made Instagram official when Tiffany posted a pic of the couple posing in front of a Christmas tree inside the White House’s Red Room.
December 2019- That year, the couple spent Christmas together again at the White House. Michael Boulos’s parents joined the couple and Donald, 74, and his wife, Melania Trump.

February 2020- The couple showed the world they are going strong by attending President Trump’s State of the Union address together.


January 2021- Boulos proposed to Tiffany in the White House Rose Garden with a $1.2 million engagement ring with a massive 13-carat emerald-cut diamond shortly before the end of the Trump administration.
Life before Tiffany:
Michael spent nights at bars around Lagos, Nigeria. He was a regular at lounges like Spice Route, known for its exotic aerial acts. During summers, the teen jetted off to Greece with his buddies on private planes. They hit up Mykonos hotspots on Psarou beach and went to parties on private yachts on the Mediterranean Sea.
Incidentally, he did cross paths with Tiffany in Mykonos a few years down the line. Don’t mistake him for another spoilt brat; the man who believes in hard work, play hard ideology holds a degree in business management.
Seal of approval from the famiy:
Tiffany’s mother, Marla Maples, told Town & Country that she “adores Michael. Tiffany’s big sister, Ivanka Trump, 38, gushed about their engagement on Instagram when Michael posted his engagement announcement. “Love you, Michael!” she wrote, adding a heart emoji. Donald Trump has never mentioned his future son-in-law candidly, but the president gave his stamp of approval during a Thanksgiving event at Mar-a-Lago.
He even invited Michael and his parents to Christmas Eve at the White House in 2019 and his February 2020 State of the Union. Tiffany and Michael have been spotted at several high-profile White House events since. The super-wealthy Boulos fits in perfectly with Trump’s extended family. 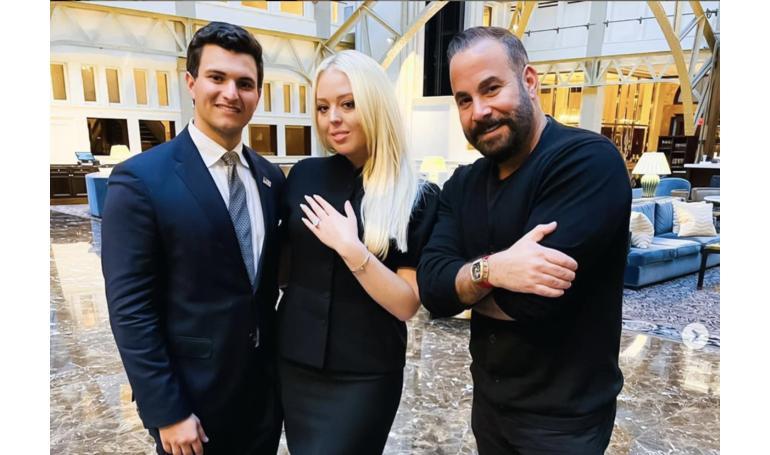 Michael’s gifts to Tiffany:
Besides the massive engagement ring, Boulos whisked tiffany on a romantic trip to Phi Phi Island in Thailand. They have taken several trips to New York and partied in gorgeous Greece as well. They were spotted strolling along a beach and boarded a boat in the Aegean Sea.


A mega wedding at Mar-a-Lago?
The upcoming nuptials are expected to be no expense spared affair full of glitz and glamour. Rumor mills are suggesting the youngest of the Trump kids and Boulos will have two big deal weddings. They both want to marry in a big ceremony, which will have all elements of your basic international spectacle. Many speculate the wedding will be held at Mar-a-Lago, owned by former President Trump, and would make for a lavish summertime wedding.
Tags from the story
Donald-Trump