‘I Don’t Want Them to Be Entitled Jerks’ is what billionaire Mark Cuban said about raising his kids. If the shark has declared it, there is little chance the little fish will be swimming in a different direction. Cuban and wife Tiffany Stewart’s parenting plans for their three kids, Alexis, Alyssa, and Jake, are crystal clear. The couple aims to instill specific values in their kids, like understanding the importance of money and bringing them up as a working-class family (despite being worth nearly $4 billion). It also elucidates why his firstborn Alexis Cuban comes across as easy-going, positive, and pleasant. Her Instagram is choc-a-bloc with endearing family moments and oodles of fun memories with friends and life in Dallas. Clearly a daddy’s girl, Alexis has her dad wrapped around her little finger, not in a bratty way but in a relatable, entertaining, acing-TikTok dances way. Let’s take a look at the lovely father-daughter relationship one of the world’s most enterprising men has forged with his eldest and how he is doing it perfectly well:

Alexis Cuban is a Dallasite through and through:
Born to parents Mark Cuban and Tiffany Stewart, this 19-year-old teenager has lived, grown, and studied in Dallas. She is the oldest among three kids who grew up in the upscale Preston Hollow neighborhood. Her younger siblings are Alyssa, 16, and her 12-year-old brother, Jake. Alexis recently graduated from the prestigious Hockaday School, an independent, secular, college preparatory day school for girls located in Dallas, Texas. The tuition averages $32,000 for upper school day students.


Mark Cuban posted a heartwarming video on her recent graduation with throwback images “Can’t believe you are graduating.” The background score- The firstborn daughter is always the female version of her father spoke volumes of his feelings.


Mark Cuban’s home has rules, chores and oodles of family time-
Cuban and his wife take a page out of Bill and Melinda Gates’s parenting book. The Dallas Maverick owner ensures his kids contribute to everyday chores. Cuban and Tiffany lead by example by being hands-on parents cooking their children’s dinner and putting them to bed at night. Alexis and her siblings have had a traditional upbringing with a nanny present only during the working week and no private chefs or butlers. “Then the rest of the weekend it’s just us,” Cuban told Business Insider. “It’s us putting them to bed. It’s us at dinner. We try to be as normal as possible. The whole idea of someone serving you, this and that, that’s not us.”
Mark, the billionaire, has instilled a hard worker in Alexis
“I’m not going to write you checks. You don’t just get a credit card. You can’t just buy whatever you want,” shared Cuban. He also highlighted how a 16-year-old Alexis took up an internship during summer instead of lounging in the Hamptons: “My 16-year-old had an internship this summer. She worked and did a good job and made her own money — and when she makes it, she can spend it on whatever she wants.” He also shared a tidbit on her frugal nature, “She still saves it for the most part, so I give her credit.”
Alexis doesn’t flaunt her family fortune on social media:
In fact, there are zero pretenses. There are no glimpses of the lavish mansions or holiday homes. Nor any selfies taken inside the Guinness World Book record-breaking $40-million private jet her wealthy father owns. A lot of credit goes to her parenting. “I’m not the dad that comes home with a ton of presents,” he recently told Business Insider. “I am the dad that says, ‘Pick that up. Take that; put it in the sink. No, you have to earn that.’ I want them to recognize that the only thing special about themselves is what they make for themselves.” 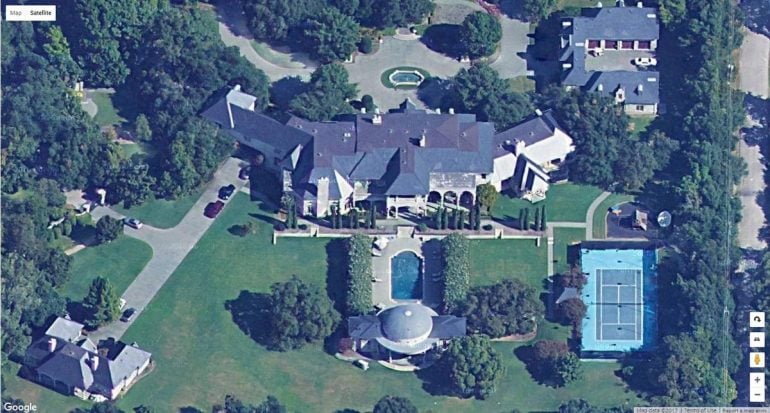 Alexis grew up in a massive French chateau-style home that sits on 7 acres. The 23,676 square feet mansion has ten bedrooms and sixteen bathrooms in the main house. The super luxurious home flaunts a swimming pool, spa, a basketball court, and even a full-sized tennis court. In addition to this family home, the Cuban clan unwinds in their Californian home, aka Laguna Beach holiday home. This 7,867 square feet property features six bedrooms, six full bathrooms, and three half bathrooms, according to Fancypantshomes.


Billionaire Cuban knows how to have fun with Alexis without splurging big bucks:
Anyone who follows Mark Cuban on Instagram knows the father loves making TikTok videos with his kids, Alexis in particular. The wealthy ABC star values these little moments and shares them with his fans, who can vouch that with Alexis out to conquer her world, the American billionaire will undoubtedly miss these light-hearted moments and adorable dance lessons from Alexis.


It’s refreshing to see a money-making shark enjoy the ordinary things in life; from meals at iHop, trips to Disneyland, and vacations at the Cayman Islands; Mark Cuban is getting an A on the parent report card.

Dwarfing the Qatari’s spend of $220 billion on the 2022 Fifa World Cup, Saudi Arabia’s…

Not Dubai or Singapore, but the worlds highest outdoor pool has opened in China, and…

In its 256 year history, Christies’ just had its best year yet