It’s not that I’m asking you to play spot-the-differences but you will immediately spot out only one difference in Fukasawa’s nine chairs. All of them are equal in size and shape, except for the material used for each. Marble and redwood along with concrete, acrylic, wickerwork, attaché-case metal, polyurethane foam, felt and even hay is used to erect this limited edition chairs. Each material transforms the appearance of the chair, creating what seems like an optical illusion. The transparent acrylic chair seems to melt away to nothingness. The marble one looks chunkier, and the redwood chair chunkier still. That’s exactly what their designer, Naoto Fukasawa, wanted to happen when he hit upon the idea of creating a series of chairs to illustrate the impact of a single design decision – the choice of material. Bottom line is that working without the constraints of market and production logic has a fantastic liberating effect which in turn gives birth to ground-breaking solutions and new ways of seeing the design. 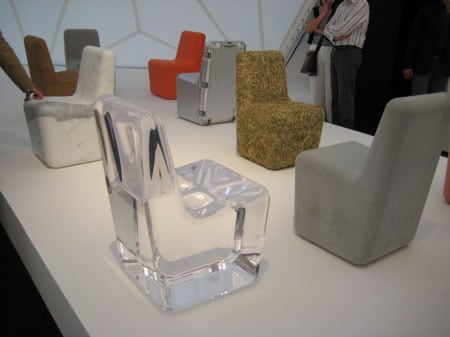 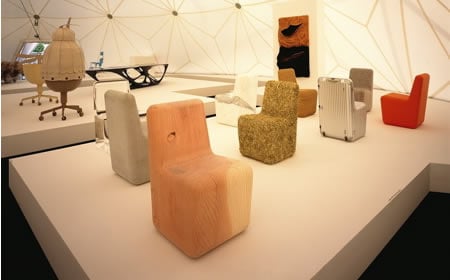 All this is a part of Vitra Editions, a collection of 15 limited edition objects commissioned by Vitra, the Swiss furniture company, from a gilded group of architects, including Frank Gehry and Zaha Hadid; and designers, such as Jasper Morrison, Hella Jongerius, and the French brothers Ronan and Erwan Bouroullec. Vitra Edition is a laboratory that gives designers, architects, and artists the freedom to create experimental furniture objects and interior installations. The Vitra Edition prototypes will be shown for the first time at the Vitra Campus, Weil is Rhein (Germany), from June 13th to July 22nd, 2007. Some of the editions will be sold later this year for between €5,000 ($7,000) and €100,000 ($ 140,000) each.

Tags from the story
Chairs, Limited-Edition