After legends such as Diane von Furstenberg, Jony Ives, and Karl Lagerfeld, it’s time for Christian Louboutin to design the infamous Christmas tree that adorns the front porch of Claridge’s hotel in London each year. The 2019 collaboration is titled ‘The Loubi Express’ and is inspired by the designer’s nostalgia of rail travel.

Gorgeously glittering as ever, the Christmas tree is conceptualized as a glittering Louboutin-red train carrying brown paper packages tied up with red ribbons along sire a wagon car that sits next to tIt features strings of fairy lights perched upon snow-covered branches, gold and scarlet trinkets, gingerbread-stiletto biscuits, and even some Louboutin lipsticks. 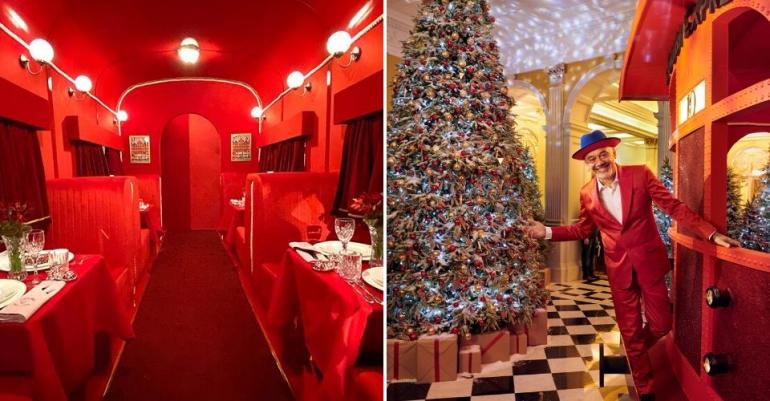 The tree reaches an impressive five meters tall and features a glistening gold leaf crown on the top in place of a star. ‘The Loubi Express’ isn’t all décor as its intimate wagon car serves up a decadent fair such as prawn tempura, truffle gougères, and the hotel’s signature Lobster Wellington alongside champagne cocktails and pineapple punch.

Commenting on his design, Louboutin said “It is such an honor to be invited to design the Claridge’s Christmas Tree, the hotel is my second home when in London and I am glad to bring a little piece of Paris to such an iconic London landmark. The idea of travel has always been a key source of inspiration in my work and I wanted to capture the excitement and romance of it. There is something nostalgic about travelling by train, it reminds me of grand adventures and journeys home.” Well, Christmas sure is merry for Claridge’s we say!

Tags from the story
Christian-Louboutin, London