Louis Vuitton, here’s a question- did you wake up on the wrong side of the bed? The world is flipping over your latest offerings and rightly so! Who in their right mind would fly a $10,400 kite? And what part about a $2,390 yoga mat seems reasonable? It’s not just about the price here; a yoga mat under $2500 seems cheap compared to a good-for-nothing nearly $11,000 kite. But Louis Vuitton must’ve assigned the project to someone ignorant as the luxury fashion house released the yoga mat made of cowhide leather. Now anyone who knows anything about yoga knows it’s a serious concept of Hinduism just like cows are sacred. An opulent yoga mat made of a dead cow clearly annihilates the very idea of yoga and its history. This has led to Hindu religious statesman, activist, and President of Universal Society of Hinduism, Rajan Zed, to call the product ‘highly inappropriate’. So grave he thinks this transgression is, Zed wants LVMH CEO Bernard Arnault, Louis Vuitton CEO Michael Burke, and Louis Vuitton Executive Vice President Delphine Arnault to issue a formal apology and pull the item as it goes against its the concept of ethical responsibility.

About the mat- it is engulfed in luxurious House signatures, made out of natural cowhide leather, and carries the monogram details on the canvas strap and cardholder. The bag measures 35 x 66 x 30 cm and is equipped with a non-slip feature. Gold-colored hardware enhances the subtle beige hued yoga mat. Louis Vuitton has not yet issued a statement regarding the outrage over its Yoga Mat and it’s currently selling for $2390. 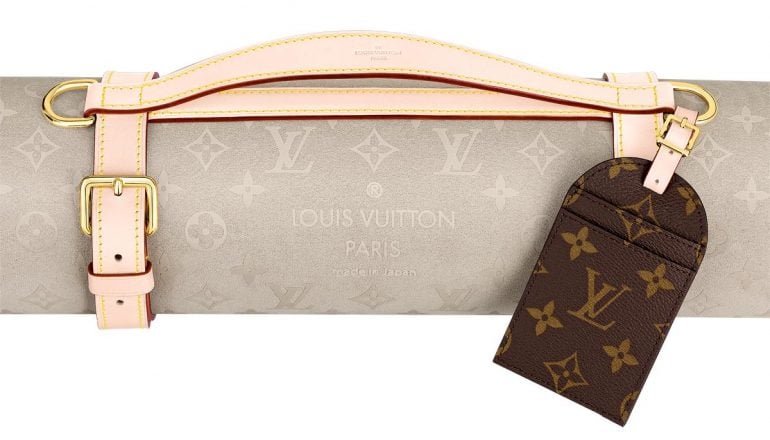 Tags from the story
Louis-Vuitton, Yoga