As if the range of TVs available was not confusing enough, Mitsubishi has come out with a total of 17 new TVs to confuse you further. Before we go into the details we need to hail technology and the advances that it makes resulting in the numerous choices that they give us. Nine top-of-the-line, premium 1080p DLP HDTVs with unique Thin Frame, slim depth, ultra-compact design plus eight top–of–the–line, premium 1080p LCD flat-panel HDTVs with a unique thin frame, ultra-compact designs have been launched by Mitsubishi. The DLP HDTV includes Mitsubishi’s unique 6-Color Light Engine making these televisions the only HDTVs to produce images with six separate colors. The 40″, 46″ and 52″ 1080p LCD flat panel HDTV features Mitsubishi’s super Thin Frame with high-quality hidden speakers for more picture in a smaller space than ever before. It measures about an inch, which is less than half typical LCD flat panel frame widths, resulting in a space savings of over two inches in cabinet width compared to most flat panels. Available in two kinds of finishings: Platinum Black with a Platinum Black accent and Diamond with sleek high-gloss Black Pearl accented by a Diamond Blue light. 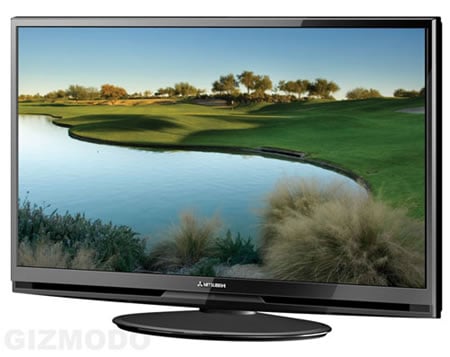