The 2022 Hummer pick-up might not be the coolest electric vehicle currently being developed by General Motors, despite its jaw-dropping Crabwalk mode. Instead, it’s something that’s truly out of the world. GM has teamed up with Lockheed Martin to develop the next-generation lunar buggy to be used by NASA on its Artemis program. The lunar exploration program launched in 2017 aims to land the first woman and first person of color on the Moon by the middle of this decade. The two companies collaborated to pitch a conceptual Lunar Terrain Vehicle for the mission. In a joint press conference, GM and Lockheed Martin announced that the lunar rover would use the automaker’s autonomous driving technology and is “being designed to traverse significantly farther distances” than Apollo-era buggies.

“Surface mobility is critical to enable and sustain long-term exploration of the lunar surface,” Rick Ambrose, executive vice president, Lockheed Martin Space, said in a statement. “These next-generation rovers will dramatically extend the range of astronauts as they perform high-priority science investigation on the Moon that will ultimately impact humanity’s understanding of our place in the solar system.” The lunar rover is still in the early stages of development, and most of the specific details have not been announced yet. However, the presentation made by the two companies stated that it will be completely electric and will be “made of very lightweight, strong and resilient materials.” 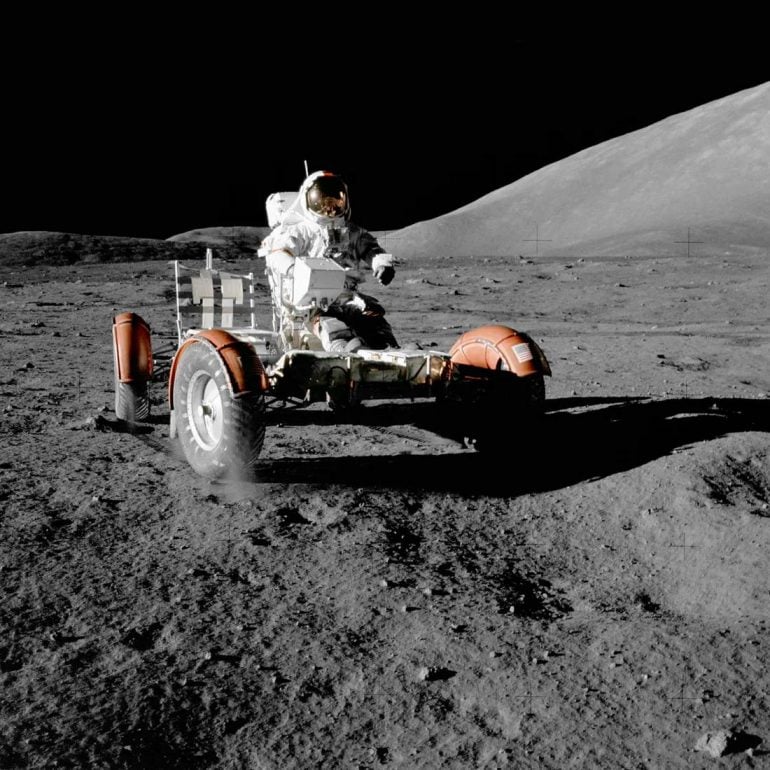 The new lunar rover will play a key role in the Artemis program by helping in building infrastructure on the moon to support longer stays and ambitious science and exploration objectives. “As we return to the moon with Artemis, we’re seeking new and innovative approaches that allow us to operate robotically anywhere on the lunar surface and explore more of our nearest neighbor than ever before,” Steve Clarke, deputy associate administrator for exploration at NASA headquarters, said last year. GM’s association with NASA on lunar missions is not new. It provided vital hardware and technology and worked as a subcontractor for Boeing on the electric Apollo Lunar Roving Vehicle (LRV), used during the Apollo 15-17 missions.

Tags from the story
GM, Moon