Motorola debuted the new RAZR 5G foldable phone a few weeks back, which arrives with a bunch of updates and subtle design tweaks over the first-generation RAZR that was launched earlier this year. By combining the novelty of foldable display with the original Razr’s nostalgic appeal, Motorola hopes to capture a big slice of the foldable smartphone market with the RAZR 5G device. To build up hype around the premium phone, the company has reportedly entered into a collaboration with Montblanc to introduce a special edition version of the flip phone. According to a report by Gizchina, Motorola’s parent company Lenovo listed the Motorola RAZR 5G Montblanc Special Edition on its website in China with a photo of the box. However, Lenovo hasn’t yet revealed any information or specifics of the special edition officially. 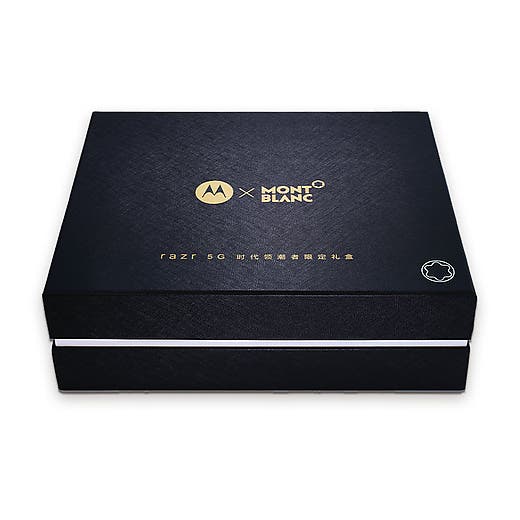 The package appears to be bigger than the standard phone’s retail box and features both Motorola and Montblanc’s logo on the top. Although we don’t have any information on the contents of the box, we expect it to come with special accessories featuring distinct designs. The device might also feature the logos of both the brands and get tweaked Android skin along with special wallpapers. The hardware might not be different from the standard RAZR 5G. The foldable phone runs on the Qualcomm Snapdragon 765G processor and gets 8 GB of RAM and 256GB built-in storage. There’s a 6.2-inch flexible AMOLED panel with an unusual resolution of 2,142 x 876 pixels on the inside and a 2.7-inch external display. In terms of optics, it comes with a 48-megapixel quad pixel main camera with f/1.7 aperture and optical image stabilization, while the front features a 20-megapixel quad-pixel selfie camera. There’s no word on the pricing and availability of the Motorola RAZR 5G Montblanc Special Edition, but we expect to it be considerably higher than the standard’s $1399 price-tag.

Tags from the story
Mont-Blanc, Motorola