What happens in Vegas stays in Vegas – and that’s a saying you’ll be certainly adopting if you happen to dine at Las Vegas’ Hakkasan and have an additional $500,000 lying around. The recently unveiled five-storey culinary and nightlife saloon at the MGM Grand Hotel & Casino, is one of the first ever tenants that has succeeded in bringing out prominent amendments to the exterior of the building without receiving much flak.

The acclaimed restaurant brand – having stamped its signature across various cities across the globe – has recently unveiled its one-of-a-kind bottle service “The Armand de Brignac Dynastie Collection”. Most definitely, the brand boasts a fine selection of ornate bottles and pewter ace of spades emblem. Featuring a delectable collection of nine bottles of Champagne, including three bottles concocted expressly for this package, which include the likes of 4.5-liter Rehoboam, 9-liter Salmanazar and 12-liter Balthazar bottles. 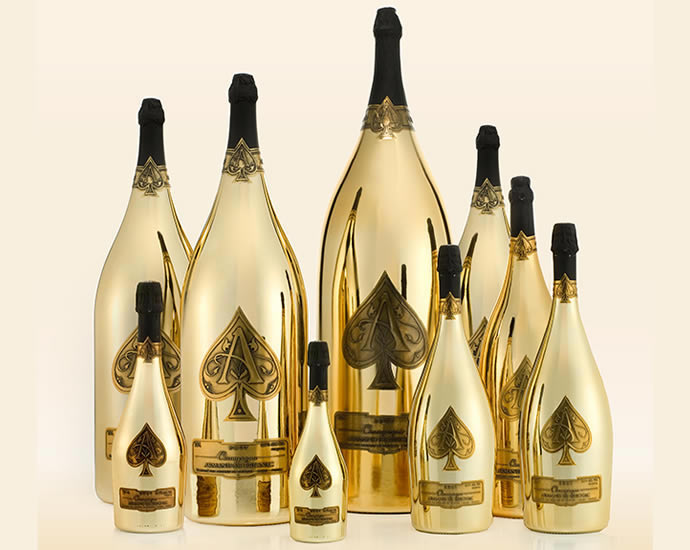 Once you summon your cocktail waiter with your order, the aperitifs begin to flow to your table.
And just by the way, Armand de Brignac’s prestige cuvée Brut Gold Champagne is served in every available bottle format from the standard 750-milliliter bottle to the world-record-breaking 30-liter Midas. By volume, that’s 109 standard bottles of Champagne.

Of course, an exclusive service like this is much in demand considering each bottle is crafted by hand by just eight people at the “family house,” which was established in 1763 in Chigny-les-Roses, France.

Do not be alarmed if your reservation is turned down since there’s a global waiting list for all of Armand de Brignac’s large format bottles (especially the Midas). So, once the collection is sold out, it’s going to be a while before the Champagne stars align for a second round.