Lover of bling? Then you can add Deca’s gilded grilled cheese sandwich to your ‘must-haves’ list. Quite literally, in fact! The restaurant at the Ritz-Carlton hotel in downtown Chicago is celebrating National Grilled Cheese Month. For which, they have created the sandwich of all grilled sandwiches featuring black Iberico ham “sourced from pigs” that “roam free in the pasture eating acorns” in the “south of Spain,” “artisan” country sourdough bread and, wait for it, 24k gold!

Called the Zillion Dollar Grilled Cheese, the gilded sandwich available all through April, is made with artisanal sourdough bread coated with Laudemio Marchesi de’ Frescobaldi extra-virgin olive oil, which retails for more than $30 a bottle. Its zillion-dollar glory continues with the meat that is salted and air-dried for six weeks, then cured for a minimum of 12 months. “Up until a few years ago, you could not get Iberco ham in the United States,” said Eric Ciechna, a host at the restaurant. “It’s so insanely expensive. We get it in very small quantities.” 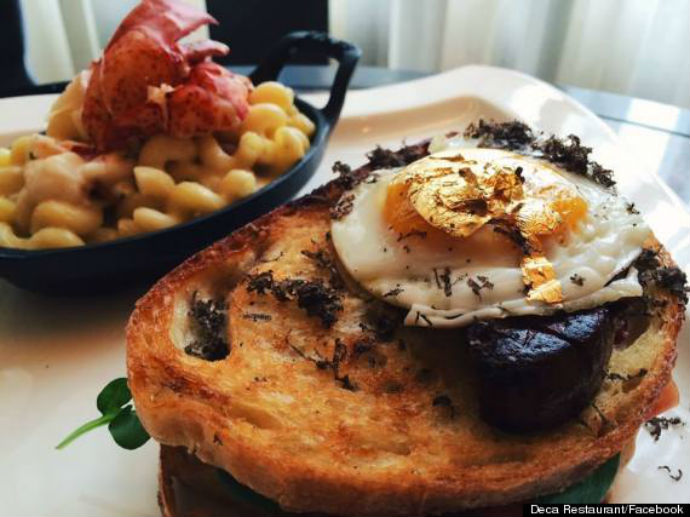 Also making a delectable appearance are Ellis Family Farms heirloom tomatoes, 100-year-old aged balsamic vinaigrette and Oregon Perigord white truffle aioli. The crowning jewel sandwiched among it all, remains a 40-year aged Wisconsin cheddar infused with 24k gold flakes. Hudson Valley foie gras, which costs about $60 per pound and sunny-side-up duck egg toppings only add to the decadence, with lobster macaroni and cheese on the side, if you will. And you will, given the entire thing costs an eye-watering $100! Although, if you were to believe Ciechna, you’d probably think that’s a “steal” given the extravagance of its ingredients.