East rolls up to west! Jumeirah is invited to create one of the world’s most luxurious hotels in a 51 story glass tower, combining spectacular residential apartments and luxury hotel accommodation, next to the Thames in Southwark. Jumeirah has signed an accord with Beetham Organization to create The Jumeirah Hotel at Beetham Tower, the new £600 million slender curved glass landmark for London. The tower will stand 180 meters high, with the hotel’s planned observation deck sitting 45 meters higher than the famed London Eye. In what will be a major boost for tourism in London and for Southwark and the South Bank as a new focus for visitors to the capital, The Jumeirah Hotel will be sited in the lower half of Beetham Tower and will have 261 spacious rooms and suites, a spectacular ballroom that will accommodate large-scale conference and banqueting events catering for up to 800 people, plus a number of smaller meeting venues. 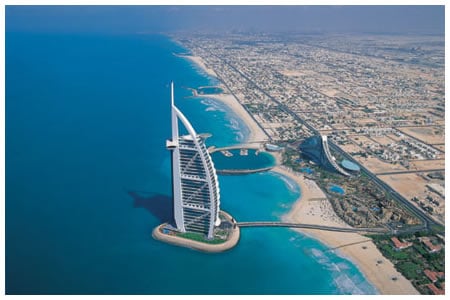 The hotel will have a variety of restaurants and bars and a state of the art spa, health, and leisure facility that will be located on the 26th and 27th floors of the hotel, with stunning views across the capital. The new tower, designed by award-winning Ian Simpson Architects, will also have public facilities, including a new plaza wrapping around the base of the tower with cafes and restaurants and access via an express elevator to a five-story high public viewing gallery at the top of the tower. The hotel will open in 2011 and is expected to be a major attraction for visitors to the 2012 Olympics. Jumeirah properties are regarded as among the most luxurious and innovative in the world and have won numerous international travel and tourism awards.
Source