History repeats itself, literally and glitter-ally. Laurence Graff, in 1970 unveiled a photo of a model wearing an ornate coiffure decorated with $1 million worth of diamonds and precious stones. Known as “Hair & Jewel,” it catapulted his 10-year old or, in this case, young Graff Diamonds to global fame. Over 40 years later, to recreate that same celebrity, the company, now recognized as one of the world’s best-known international luxury brands, has debuted a $500 million dollar version of the iconic image coinciding with the opening of its 40th store globally.

A $2.5 million bejeweled bras has earlier been fashioned by Victoria’s Secret to elevate its not-so-secret global status. Still, it clearly has nothing on this half a billion-dollar hairdo that carries brooches, rings, pendants, earrings, and bracelets. David Slijper photographed its headline-making image to commemorate Graff’s 60 years in the jewelry world. “Until this time, images showing fine jewelry were typically modeled in a more conservative style,” Graff said in a statement. “This image broke the mold by using a younger model and created the idea of diamonds being aspirational to younger women.” 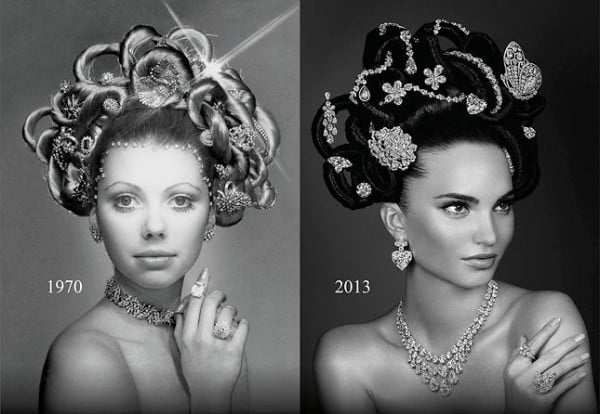 UHere is one model who will forever forget the term “bad hair day.” sing 22 rare jewels created at Graff’s headquarters in London, Eamonn Hughes carefully coiffed the hair of Dalia Gunther. Among the 22 unique jewelry items, there are three large diamond “heart cut, “Graff Sweethearts, and rare pieces obtained from the 550 carats diamond of Letšeng Star, one of the largest in the history of the world.

[Via – Forbes and The-Citizens-Of-Fashion and Diamonds]

Tags from the story
Graff