Like everything else in life, social media too has a lot of pros and cons that can be argued until the end of time. But no one will debate about the warmth and love exuded from heart-warming pictures of a bear abandoned by his mother at birth and raised by humans to now enjoying a career as a model posing alongside children and adults in Moscow. Credit goes to Photographer, Mila Zhdanova, 40, from Moscow who completely transformed Stepan’s life by photographing him in a series of fantasy-inspired scenes alongside models from around the world. The photographer knows the 28-year-old brown bear Stepan who weighs in at a terrifying 53 stone through her friendship with the bear’s owners, Svetlana and Yuri Pantileenko. Her mesmerizing photography captures Stepan in his natural grandeur along with models in traditional Russian dress.

True love knows no bounds. This picture bears (pun intended) eerie similarities to the fairytale of beauty and the beast.
Whoever said there is no love like a dog’s love clearly never got kissed by a bear. Stepan is most comfortable around humans and isn’t afraid to show it.
The image oozes warmth right from the color combinations seen in the image to the setting sun and the glowing light it emits to the traditional garbs of the model and the serene Stepan.
This image is of Stepan the bear along with his owner Svetlana and her twin sister Irene. I guess even Stepan is confused about which of the two is his master. This shot was taken to celebrate the twin’s birthday.
A bear has got to eat right? Stepan enjoys a yummy snack in the snow alongside a pretty model. What is that you savor? Honey, Tula Pryanik, or pastila?
This photo shoot happened around New Year’s Eve and is capturing the winter moods to perfection. Snow, an adorable bear, a princess, and winter food, together make for a perfect picture.
Other than a bear hug, Stepan can also gift you pretty women some candy. The model smiles as Stepan charms the lady with some sweet treats.
This animated picture shows a pancake-loving Stepan enjoying the fabulous, snow-clad outdoors, posing with a child.
Models have hopped from Thailand, Australia, Germany, the UK, and Israel to work with Stepan 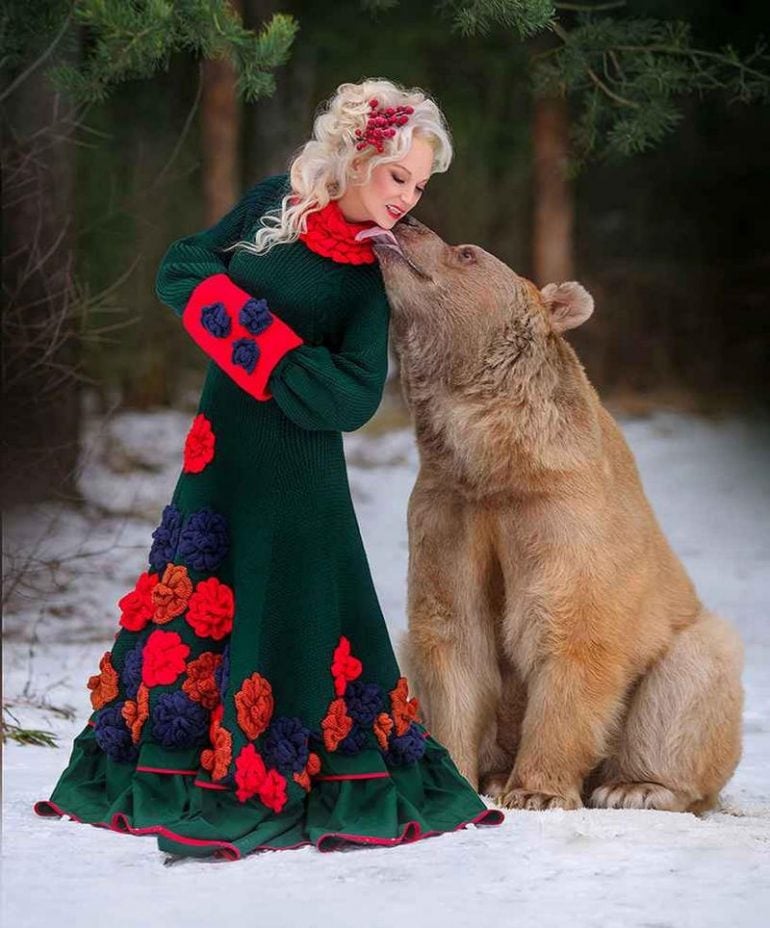 A beautiful woman in a full-length fairy-tale dress held hands with the 750-pound bear as she bent in for a kiss.