If you are one of those who are too lazy to go to the ATM to withdraw money, a Polish bank has come up with a new service that will bring a smile to your face. Poland’s Idea Bank has rolled out a mobile ATM service that was created by blending a brilliant idea with one of the most innovative cars, the BMW i3. The Idea Bank has outfitted four BMW i3 EVs with built-in cash depository ATMs that can be called upon by small businesses using the IdeaBank Money Collection app. “Entrepreneurs who personally deliver their income to the bank or stationary CDM waste both their time and money. Our service aims at lifting that weight off their shoulders,” says Dominik Fajbusiewicz, Idea Bank board member. 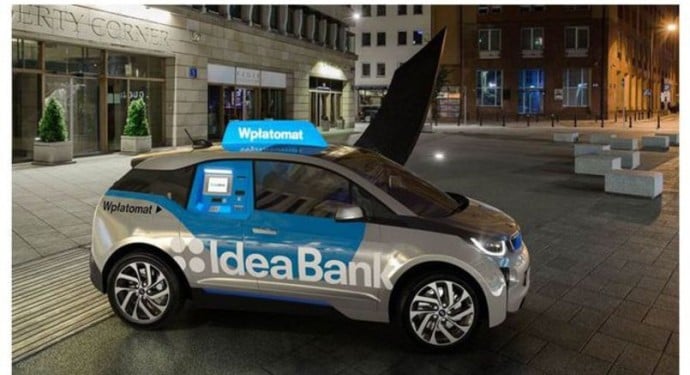 The i3 ATM allows Idea Bank’s clients not only to deposit, but also to withdraw their money. The first of the four BMW i3 mobile ATMs has already been put into service in Warsaw. This will help the bank to gauge the popularity of the service and if it proves to be a success, it will be extended to other cities across the country. As of now, the service is oriented towards the bank’s busy customers who don’t want to waste time by going to the bank to withdraw of deposit money.
[Via – BMWblog]

Tags from the story
Bank, BMW