Apple might be the largest brand in the world currently in terms of market capitalization, but little more than decade and a half back it was at the verge of bankruptcy. That was when Steve Jobs had returned back to the company and Apple introduced the iMac G3. Not a revolutionary product so as to say but it was dramatically different from any previous mainstream computer as it came in candy colored plastic body unlike the other boring desktop computers of its time. Thanks to the new generation of slim, elegant, and noticeably less colorful Apple computers, the iMac G3 has become a forgotten element of the brand’s stellar revival story, but one Jake Harms of the United States found a way to bring it back from the dead in a useful way. He has turned the translucent Mac shells into cool aquariums. Called Macquarium, it is an Apple G3 iMac that has been converted into a 3.5 gallon fish tank. 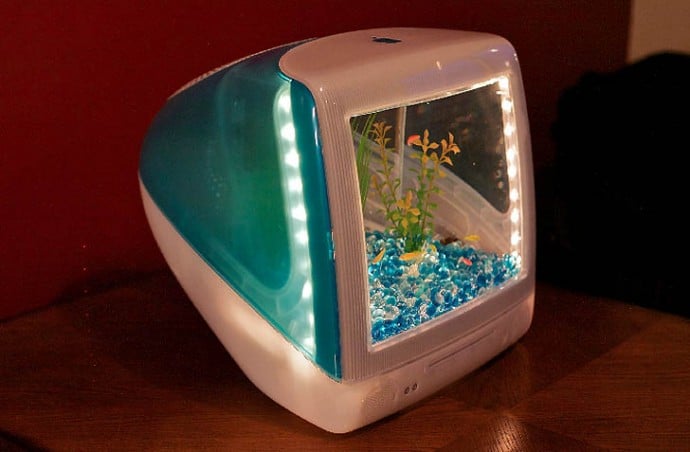 Harms sources the iMac shells from recyclers for his aquariums, giving new life to the obsolete computers. After sourcing the unit, he polishes each with a high speed buffer, restoring the bright hues to their original glossy glory. The inner tank follows all of the curvaceous lines of the original iMac, including a curving bubble front that lines up flush with the iMac’s screen, creating a perfect view from the outside. The tanks come in the same vibrant colors as their iMac predecessors- blue, aqua, white, smoke, red, flower power and blue dalmation. The fish tank comes with a built in filter and miniature lights that line the ‘screens’, which creates a dazzling effect at night time. To get your own made-to-order Macquarium will cost you $199 plus shipping, but in case you have an old iMac G3 at your place gathering dust, there’s also a DIY kit to create your own Macquarium which is priced at $135 plus shipping.