This next news comes at a time when the world is still in a post-Oscar hangover. Because while many are still reeling under the science fiction brilliance of ‘Her’, for those who aren’t Joaquin Phoenix and not in any way associated with the academy award winning film, this might be, by far the most fantastical thing- Jaquet Droz’s The Signing Machine.

Since we were on the topic of films, before we move on to the amazing automaton, we’d all do well to remember Pierre Jaquet-Droz’s trio of renowned and strikingly realistic automata – The Writer, The Draughtsman and The Musician. For of the three, The Writer could be programmed to produce a given sentence in a flowing script, thus making it the source of inspiration for ‘Hugo’, the Martin Scorsese film. 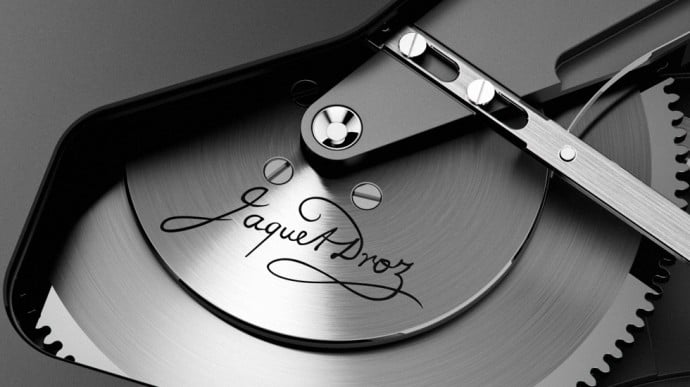 Back in the real world, Jaquet Droz goes a step further with The Signing Machine. With dimensions that borrow from the most emblematic object of the new millennium, the smartphone, not only is the creation an homage to historic cam technology but it is miniature in size as well. But back to the former, the handmade cams produce a fluid, natural script, to duplicate the owner’s signature.

To some, that might sound like a dangerous development while still being profound for its time, which is why The Signing Machine has a 4-digit security code in it. It’s manufactured as a bespoke piece for its owner and simply needs pressing twice to release a hinged arm and pen. What follows can be admired through the transparent window that reveals the internal workings of what is clearly a magical testament to Jaquet Droz’s trademark genius.