Would you like to get your hands on a piece of artwork by a bear? Meet Juuso, a 17 year old, 930 pound brown bear who uses his body, especially his paws as paintbrushes. Juuso lives at the Predator Center animal sanctuary in the northern Finnish town of Kuusamo and is gaining popularity among art enthusiasts with his amazing artistic ability. His keepers discovered his talent when they found him playing with paint while redoing some of the facilities at their center. They managed to raised about 8,000 euros ($8,500) by selling 15 of his paintings. 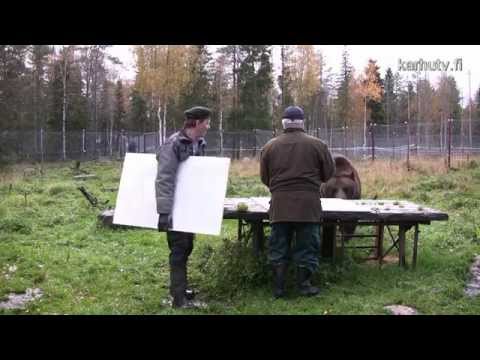 “We just leave paint for him, some plywood and paper … If we ask him to do it, he doesn’t do anything. He does all the work in his own time, when he’s alone, sitting and moving his legs on the paper,” said Pasi Jantti, one of his keepers.