A pen is mightier than a sword which is why the world values a wordsmith more than a swordsmith. Victor Marie Hugo is one such shining example of a literary career that spanned more than sixty years. A talent like his should be honored which is why the French poet, novelist, and dramatist of the Romantic Movement is being celebrated by Montblanc Writers Edition. The new limited edition pays tribute to the prolific writer best known around the world for his novels Les Misérables and The Hunchback of Notre-Dame. These two colossal works of French literature have inspired the design of the limited edition Montblanc writing instruments. The collection also gives tribute to a very personal aspect of the great literary giants’ life-Hauteville House, his elegantly furnished home in Guernsey. Crafted in the Montblanc Ateliers, four different editions bring to life the greatness of Victor Marie Hugo, and to have any piece of him would be an unparalleled honor for any aspiring writer. Montblanc Writers Edition Homage to Victor Hugo Edition is available from July 2020 from Montblanc boutiques worldwide. Listed below in fascinating detail are the fabulous Mont Blanc Writers editions and their exquisiteness:

Montblanc Writers Edition Homage to Victor Hugo Writers Edition:
The very enchanting classic ‘Hunchback of Notre Dame’ is set in Paris during the 15th century with the beautiful La Esmeralda and, the deformed bell ringer Quasimodo playing key characters. Elements from this iconic story are used in the design of this edition in black precious resin with platinum-coated fittings. The cathedral with the central rose window inspired the Skeletonized clip with a clip drop evoking the bell of Notre Dame. Hints of the gothic architecture of Notre-Dame Cathedral in Paris are spotted on the cap. As per the tale, Quasimodo was chained to in Notre-Dame de Paris which inspired the pillar-shaped cone of the pen. Special engraving of a gargoyle is seen on the Au750 solid gold rhodium-coated nib. 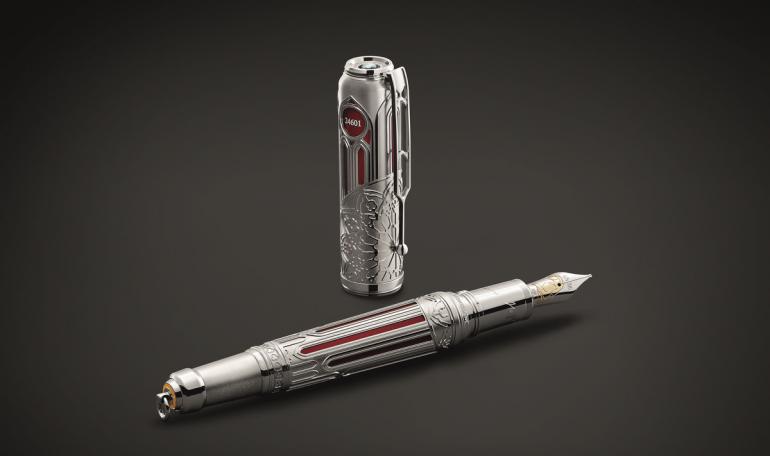 Montblanc Writers Edition Homage to Victor Hugo Limited Edition 1831:
The redemptive power of compassion and love was shown through the story of Jean Valjean, the principal character in Les Misérables. Speaking of love the red lacquer and platinum-coated metal used in this edition is metaphorical and also inspired by the prison outfit Jean Valjean is given. Jean Valjean’s prison numbers 24601 and 9430 make an appearance on the pen too and so does the rose window of the cathedral that is reinterpreted on the cap. The cap is engraved with the quote “Chaque homme dans sa nuit s’en va vers sa lumière”. Montblanc emblem crowns the edition in mother-of-pearl while the nib remains unchanged with gargoyle engravings on its Au750 solid gold rhodium-coated nib. This edition is limited to 1831 fountain pens and 1831 roller balls.

Montblanc Writers Edition Homage to Victor Hugo Limited Edition 83:
With this edition, you get one ‘nib’ closer to the iconic Victor Marie Hugo and an irreplaceable part of his life- the Hauteville House, and his stint as a watercolor painter. This precious edition comes in solid gold with transparent hues of blue reminiscent of the blue skies overlooking the Hauteville House. The author’s initials ‘V’ and ‘H’ are found on the cap as they were inscribed on the wood paneling of the Salon Chinois at Hauteville House. Quasimodo inspires the shape of the cone and the Mother-of-pearl inlay references his sword of Pair de France. In order to commemorate his achievements and extraordinary life, this edition is limited to a number of 83 pens.

Montblanc Writers Edition Homage to Victor Hugo Limited Edition 8:
This is by far one of Montblanc’s Writers Edition collections rarest editions with only 8 pieces available. The pliqué-a-jour enameling technique, a painstaking and tedious process enhances the central Rosace in different shades of red enamel. The surface looks like miniature stained-glass windows owing to the fine gold partitions. Three-dimensional gargoyles adorn either side of the cap making it look both elegant yet elaborate. The Montblanc emblem made of mother-of-pearl while fittings in Au 750 solid yellow gold are decorated with brilliant-cut diamonds.

Tags from the story
Limited-Edition, Mont-Blanc