Montblanc has once again succeeded in excelling at the art of creating imagination-defying pen design with its latest High Artistry collection that celebrates the Taj Mahal along with the opulent artistic traditions of the Mughal Dynasty in India. The Montblanc High Artistry, A Celebration of the Taj Mahal collection comprises of three different precious writing instruments, each limited to just one piece worldwide. With the help of the rare métiers d’arts of stone cutting and setting, hand engraving, enameling, and goldwork, Montblanc has transformed the writing instruments into objects of art. All the three one-of-a-kind pens vary in appearance thanks to the different materials and gemstones used; however, they all share the common theme that captures the opulence and magnificence of the great Mughal jewelry traditions. The pens feature a unique curved shape inspired by the traditional Mughal dagger, which is a sign of power, while the cap top of the pens are designed to recall iconic shape of the dome of the Taj Mahal. Instead of a traditional clip, the pens feature a peacock feather, which is a reference to the famous peacock throne made for Shah Jahan in the early 17th century. 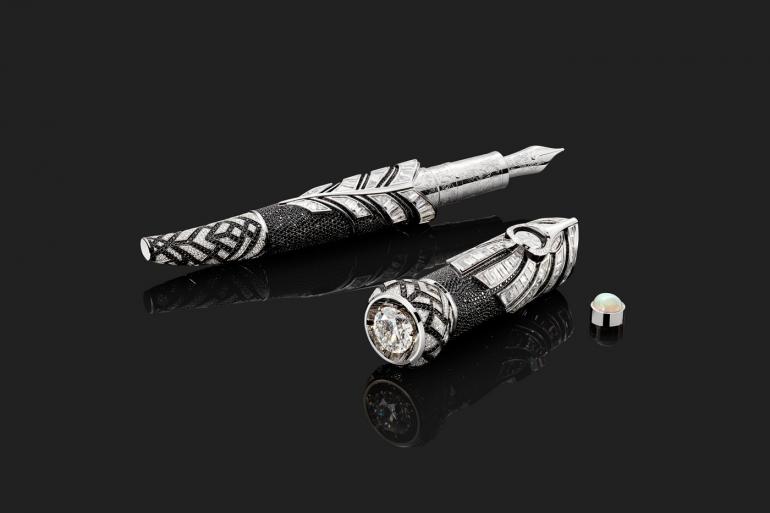 Limited Edition 1 Black Myth
Decorated in black and white, this edition is inspired by the legend that Shah Jahan planned to build himself a mirror image of the Taj Mahal, only in black. It was supposedly intended to stand on the opposite side of the Yamuna River from his wife’s resting place. It is made from white gold and encrusted with black sapphires and brilliant-cut diamonds. The crown cap gets one 6.24-karat brilliant-cut diamond. The peacock feather is set with individual diamonds totaling about 13.68 carats, and its center is adorned with a round opal cabochon that may be detached to reveal a lotus flower in the mother-of-pearl marquetry beneath. The 18-karat yellow gold pen nib is engraved with two lovebirds and is set with a brilliant-cut diamond. 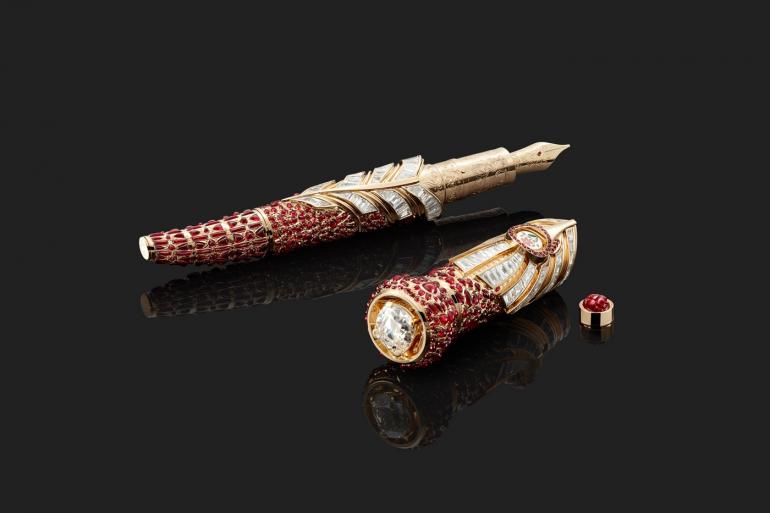 Limited Edition 1 Insignia of Power
The name of this edition draws inspiration from the symbolism of the dagger in the Mughal tradition as an insignia of power. Shah Jahan received a personal dagger from his own father at the time of his crowning to confirm his powerful status. The pen is made of 18-karat yellow gold decorated with rough rubies and crowned with a 6.42-karat old mine diamond in recognition of India’s famed diamond mines. The peacock feather is set with baguette and individual-cut diamonds, approximately 16.78 carats, while the center is adorned with an engraved ruby cabochon that may be detached to reveal a miniature enamel painting of a daisy, a symbol of love. Similar to the Black Myth edition, this too comes with an 18-karat gold nib engraved with two lovebirds and set with a brilliant-cut diamond. 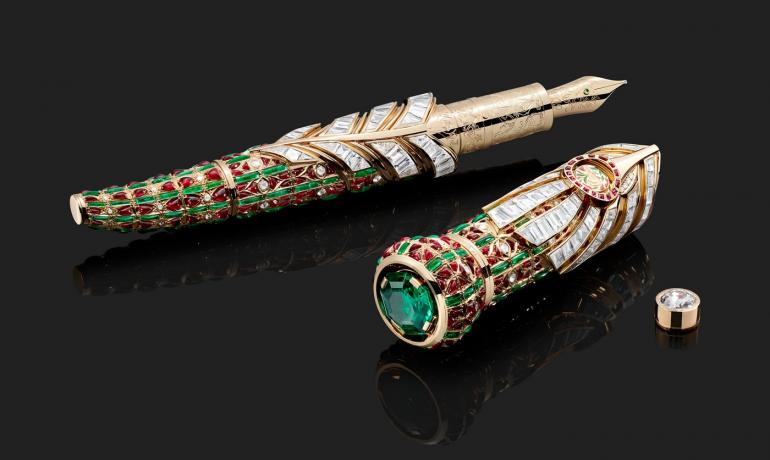 Limited Edition 1 Tears of the Moon
Emeralds, called “tears of the moon” at the Mughal Court and throughout the Empire, were often inscribed with the sacred text. These dynastic heirlooms passed from father to son, were worn as personal talismans. This edition is made of 18-karat yellow gold decorated with rubies, emeralds, and diamonds set in a style recalling Kundan stone setting. A 6.10- carat step-cut emerald is at its crown, and the peacock feather is set with about 14.79 carats of diamonds. And individual rose-cut diamond detaches to reveal a miniature enamel painting of a bird. The 18-karat yellow gold nib is again engraved with two lovebirds and is set with a tsavorite.