For $440,000 you can buy yourself a Lamborghini Aventador – one of the best looking supercars on sale currently that’ll turn heads wherever you go driving in it. Or, you can buy this jet-propelled Iron Man suite that will make you feel like a real-life superhero. Amateur British engineer Richard Browning who created this flying suit gave a demonstration of his creation in front of thousands of people at the biennial Farnborough International Airshow. “It is an energy-expensive process to hover a human being in free space with very small equipment. It consumes a lot of fuel and it is noisy,” said Gravity Industries founder and CEO Browning, “So other than for niche applications, some military, and some search and rescue, it’s mostly about inspiring people and about giving people an off-the-scale experience of an almost dreamlike, superhero- feeling of flight.”


Browning also announced an exclusive deal with department store chain Selfridges to sell tailor-made Gravity Jet Suits at its Oxford Street store in London. However, the commercial run is unlikely to last long as just nine of them have been made available for sale with a price tag of $440,000. Three anonymous customers have already expressed interest to buy the incredible flying suit. “I would describe it as a very high-end jet ski,” Browning added. “It’s a huge amount of fun but practically, not many people go to work or pick up their kids from school in a jet ski, but it doesn’t mean there isn’t a reason for having one.” 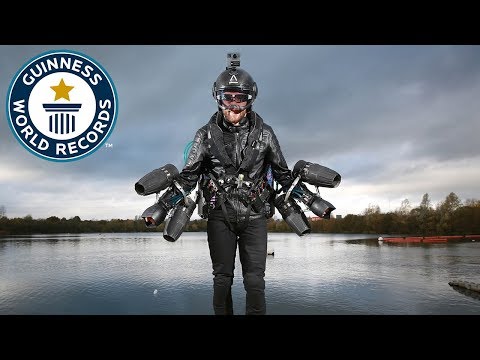 The suit along with all its components weighs 27kg suit and can fly at altitudes of 12,000 feet (3,658 meters) with a top speed of 32mph. Five kerosene-fuelled gas turbine engines are fixed to the arms and back of its carbon fiber exoskeleton that gives the suit a flying time of up to four minutes. The suit is assembled from 3D-printed parts. Included in the price is a mandatory training on how to fly and maneuver it. The 39-year-old former royal marine reserve and commodities trader built his suit in the space of just 12 months.

Tags from the story
Suit