Genies, wishes, and flying carpets that take you over the corners of the world without a ticket, a whirlwind romance, and luxury, these were the mystical elements of Aladdin that have us endlessly enamored. For those thinking it only existed in book and screen, you got it wrong. If a metaverse exists holding mansions with artworks on large parcels of land, then Aladdin flying on his carpet in the streets of Dubai isn’t shocking either. RhyzOrDie is a YouTuber with not many followers, some 1,200 subscribers for now, but his last two videos have unleashed his potential as an entertainer and content creator. Making the most of charisma, vision, and talent, the man created the magical floating carpet by crafting a PVC pipe frame around an electronic longboard and covering it with an ornate rug. 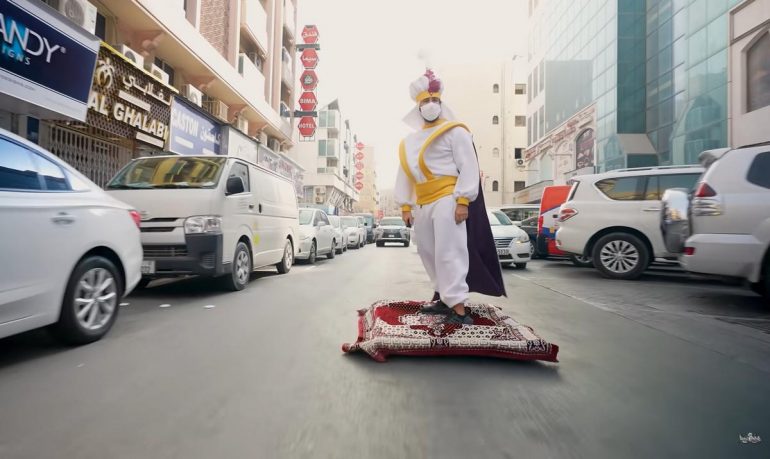 He turned the entire experience into an unforgettable one by donning the role of Ali Ababwa to perfection, with a feathered turban, cape, and harem pants in place. He guided the flying carpet through the bustling, crowded streets of a Dubai market which in itself is quite an applaud-worthy feat but the real drama unfolded when he took to the waters. The YouTuber created a pretty spectacular video by fixing the carpet next to his surfboard. The ‘eFoil board’ used for the stunt comes with an electric propeller that helped raise the rug to a slightly higher altitude making the impression of flying even more enigmatic.

RhyzOrDie posted two videos, one of him in action as Aladdin, which is enchanting, and the other a ‘behind a scenes’ video that’s utterly eye-opening. The comments on the video applauded his efforts and ideas. One viewer commented, ‘You work so hard, especially when in the sea. Good job. Very entertaining.’ Another wrote, “Very cool footage using the hydrofoil board! Love that you filtered out the shaft to make it look like it’s floating.. cool stuff!”

The video has since garnered more than 100,000 views. He also posted the video on his Instagram handle and posted, ‘Come along and join me for a magic carpet ride! If you can vision it, you can make it happen. This idea was brewing in my head for nearly eight months, and we were finally able to execute it.