With the trend toward cocooning taking hold in North America, many people are turning their homes into something more. The days of watching television the old-fashioned way (sitting on a couch with a coffee table in front of you watching basic cable) are long gone. Today, what everyone wants is a satellite TV system and a hi-fi designer home theatre. Take inspiration from Gary Sekulow who has pimped his home theater Trek-style! The sci-fi theme was born out of a few replicas and models that Sekulow had, but the Christie’s auction allowed him to purchase several “Star Trek” backlit graphic panels from “Star Trek: The Next Generation” and “Star Trek: Voyager,” which gave the theater authenticity. Other pieces include two original “Star Trek” consoles and a computer display panel from the Operation Center from “Star Trek: Deep Space Nine”. 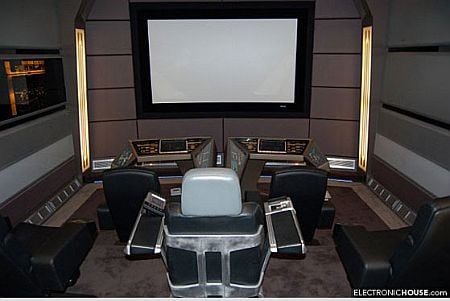 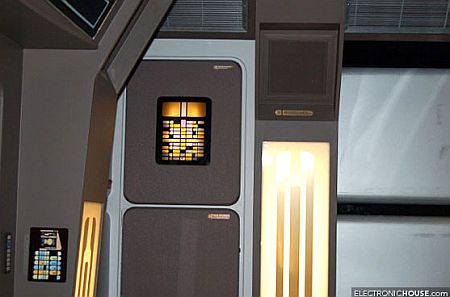 Mr. Sekulow has a favorite chair, the captain’s chair from “Star Trek: Enterprise” seasons 1 through 3 to sit and experience this dream. Dennis Erskine of Atlanta’s Design Cinema Privee has made his obsession come to life. “You walk into the room, and it feels like you are on a set of ‘Star Trek’,” says Erskine. “But turn down the lights and you are in a high-end home theater.”
Source

Tags from the story
Home-Theater, Star-Trek