Being rich does have its pros and cons. Wealth does give you a decent burial these days, but in ancient times money spelled elaborate burial rituals. After plundering the Pyramids and other burial sites of the rich, dead kings; thieves didn’t spare the affluent ancient Romans. The depiction of Gladiators on the tombs of the upper-class Roman was a common feature in the later imperial period. A dozen of these stolen ancient tomb slabs have been recovered after a three-year investigation by the Italian authorities. The carvings were hidden by thieves under a thin layer of earth near the modern town of Fiano Romano, site of the ancient settlement of Lucus Feroniae, about 25 miles north of Rome. “They were placed next to each other like dominoes,” says Anna Maria Moretti, superintendent of archaeology in northern Rome. “The looters had placed them side by side with great precision…so as not to damage them and lessen their value.” These carvings give us an insight into the games, funeral rituals as well as religious and political significance of the elite Romans. The recovered slabs have been dated to a period very early in Augustus’s reign before he brought about certain changes in the Ludi (gladiator schools) and the style of gladiators’ armor and weaponry. 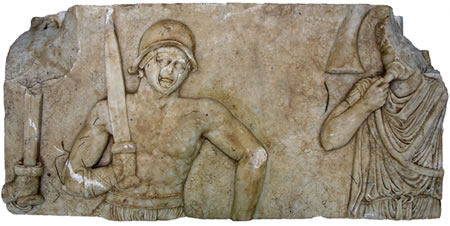 The recovered slabs depict six pairs of fighters. “We can see a gladiator stepping on the hand of his opponent (right),” Moretti says. “The downed gladiator raises a finger in the typical gesture used to plea for mercy. Another scene shows a dying gladiator, falling on the ground with his shield lost (above).” The stolen slabs can be viewed at the Lucus Feroniae Museum of Archaeology, where they will be on permanent display.
Source 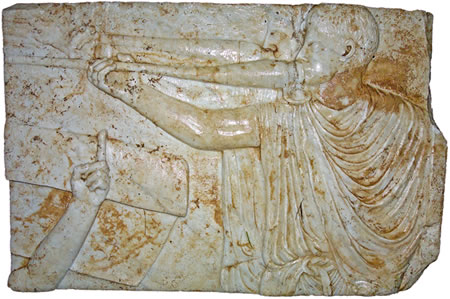