Released by the state-run Korean Central News Agency, this is North Korean dictator Kim Jong-Un pictured for the first time aboard his 174ft private jet. The boy ruler of the Hermit Kingdom took to the skies in his remodeled Cold War era IL-62M to see a high-rise construction site located along the Taedong River in Pyongyang. The Soviet Ilyushin IL-62, dubbed Air Force Un, was the world’s largest jet airliner when it first flew in 1963, however, now the obsolete aircraft sells cheaper than a Mercedes S Class does and only few are still in service. 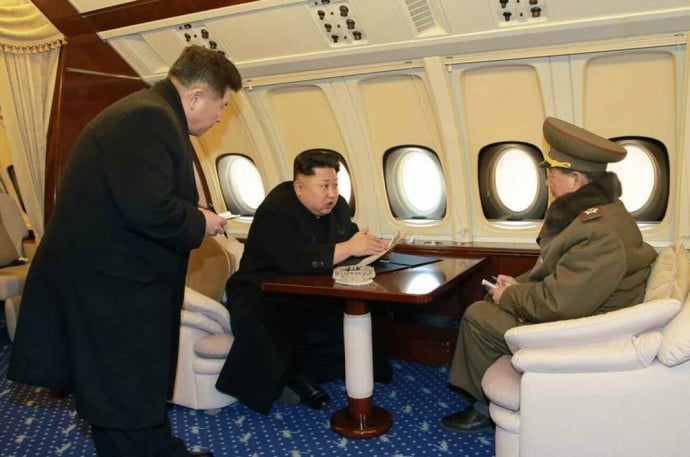 The pictures of Mr Kim, which appeared on the eve of what would have been his father’s 74th birthday, show the young autocrat aboard the newly refurbished private jet, apparently conferring with advisers by telephone. Reminiscent of the U.S. president’s Air Force One, the plush interior of the craft looks like it has had a total overhaul recently. The use of a private jet is a departure from the behavior of Kim’s father Kim Jong-Il, who had such a fear of flying that he visited China and Russia in a private armored train. The existence of Kim Jong-Un’s private plane emerged last May, when state officials released photos of him disembarking the jet.

Tags from the story
Korea, Private-Jets