Do you require seven blades next to a cigar cutter next to a signal whistle next to a golf divot repair tool next to a bicycle chain rivet setter next to seemingly countless screwdrivers, saws, and wrenches? Phew! I don’t but if you do need all these tools then you can go for the Wenger Giant Swiss Army Knife. The new Swiss Army knife contains 85 devices and can perform hundreds of functions. And it wouldn’t be Swiss Army unless it came with tweezers and a toothpick. There are even a battery-operated torch and a laser pointer with a 300ft range. Swiss Army knives are obviously good things to own. They’re standard equipment for Nasa’s astronauts and feature in the Museum of Modern Art in New York as an example of outstanding functional design. 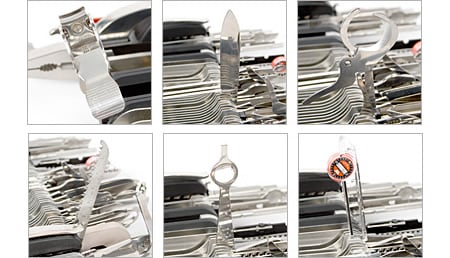 Measuring about 9inches and weighing 2lb, this master of all knives costs nearly £500 ($1000). But can you actually use it for anything?

Tags from the story
Knife