If you think you know how to spoil your pet well, think again! While going overboard with treats and play-games might be your only idea of pampering, there are some out there, who do far more for their beloved dogs than one can ever imagine! For instance, take a look at this lucky Shih Tzu who owns a fleet of luxury cars and truckloads of canine fashion. Why you ask? Simply because his owner loves him a little too much! 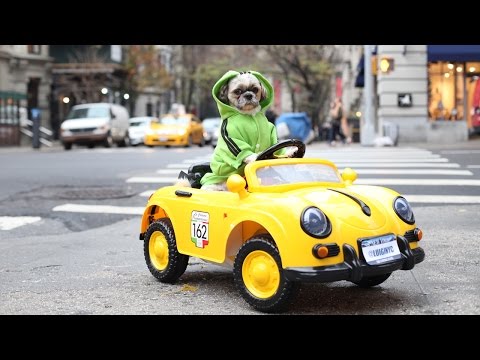 Named Luigi Maestro, the all of Shih Tzu cruises the streets of New York in cars that often visit us in our dreams! He first owned a miniature version of a black BMW, which was then followed by a Ferrari, a Porsche and a beamer! As per his benevolent owner, Anisha Lakhani, the cars bring out Luigi’s personality and also get him a fare share of attention that he deserves. She also admits to having a good time herself while lavishly shopping for her precious pooch!

Apart from a whopping $1,500 car collection, the cutsie little pup also owns a wardrobe full of high-end canine fashion. From sweatshirts, to mufflers and more, his fashion ensemble can put even a wealthy celebrity to shame. Per Anisha, she treats Luigi as her baby, and given his luxurious upbringing, we wouldn’t think otherwise either!