Real estate Mogul Ramin Messian must be quite a squanderer to invite his guests over to soak in champagne. That’s right; the millionaire gave HGTV’s “Million Dollar Rooms” a tour of the little estate his 10-bedroom mansion. His backyard is complete with a pool and jacuzzi that hold an incredible 180,000 gallons of water. It features a shimmering iridescent tile, an island gazebo for celebrations, and a wrought iron bridge to cross the watery expanse. He spent about $1 million to import 300 palm trees, few extra bucks for sand imported from Malibu, all to capture a ‘feeling of walking towards the ocean.’

His swanky oasis costs a cool $7 million. However, the most ostentatious feature of the whole setup is the champagne hot tub, in which he would empty about a 100 bottles of champagne when he had people over. 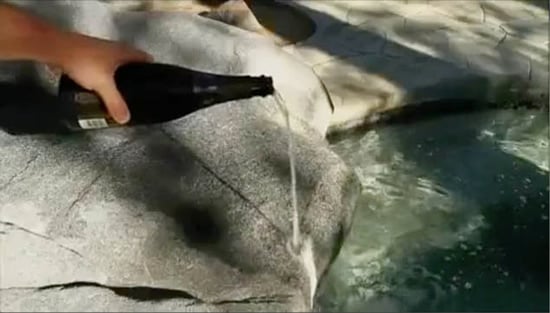 Tags from the story
Las-Vegas, Swimming-Pool